The Disabling Effects of not Being Casual

When I decided to start cycling as my commute, I spent a few months deciding on which bike to buy; I changed my mind roughly a million times between a road bike (which would cost an arm and a leg), a touring bike (for the long run) or a simple single speed. It really took about six-seven months until I bought the bike and it happened on a random search on eBay: I did my regular search of bikes under £500 (about $760) in London and just came a cross a £120 single speed bike that was in my size and pretty close by – I bid for it and ended up buying it (for £130!). I’m so happy I got that bike – not only did I cut my commute time to a third of what it used to be (walking/running/bus combo) but I got a simple and casual bike, yes, casual.

What do I mean by casual? Well, I see all the time people who get into a new outdoors activity “all in”: they buy the best gear there is (and it takes a long time to do that), buy all the needed gear to support it (from Lycra to camp stoves) and don’t go out at all until they have the full kit. Their chase for the “professional” edge, or quality experience, or what ever you want to call it, actually stops them from going out. They choose to forego the casual for the sake of the pro, but at what cost?

Even after they buy all the gear, they never go out unless is it a super adventure: it must be 3 day backcountry hike, or a 10 pitch big wall, 100 miles road cycle or skinning up a 6000ft peak to ski down, but what about some casual enjoyment? Because they bought the best of the best, just a plain adventure is not enough – it must all be epic.

The true cost of buying the best kit, painstakingly collecting all the gear you need and investing in the best in order to go outside is that you end up not going outdoors at all. You just have gear purchase lists, too many favourites to buy, and catalogs marked with those last few items to sort out your kit. You end up living your outdoors experiences on the retailer’s websites and other people’s blogs (because they already got it all for free…). 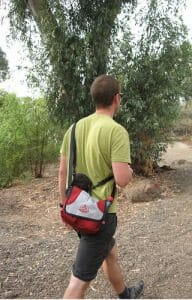 I should probably add here that I have done the same thing, more than once. I’ve avoided years of climbing due to “not having a harness” when all I wanted to do is boulder, I cancelled hiking trips because my tent wasn’t up to it, wrote too many purchase lists with my dream gear and yes, I also have a bookmarks folder in my browser called “to buy”. The big change happened when I spent some time thinking back about my childhood and teenage years after not going outdoors for about 2 years (after moving to the UK, it took me some time to adjust).

When I was young we went hiking with nothing, and I do mean nothing: a simple school bag with 3 litres of water, some canned food and a waxed sleeping bag that weighed more than me, but it worked. I went every where in Israel with that basic kit, no matter how much it weighed or if it was cold or hot, that is all I had; so if I could do it then, I can do it now.

In the last 3 years I’ve been doing my best to keep my adventure casual while also indulging in the big and epic ones: 3-4 hours in the local forest, a simple bike ride to a park that is a little further than your regular commute, just going to the local climbing gym and doing a couple of hours of bouldering. You can do any of those great adventures in a day and I feel that we easily forget that enjoying the outdoors casually can be just as enjoyable.

Now, that you are done reading, leave the screen (whatever size it is) and go out for an hour or two. Go for a trail walk, run, cycle, climb; no matter where you are it is possible to just be active and being casual. Oh, and when you are done, come back and tell me in the comments what you have just done.

To see the original article, go to http://www.outdoorsfather.com/2015/05/disabling-effects-not-casual/