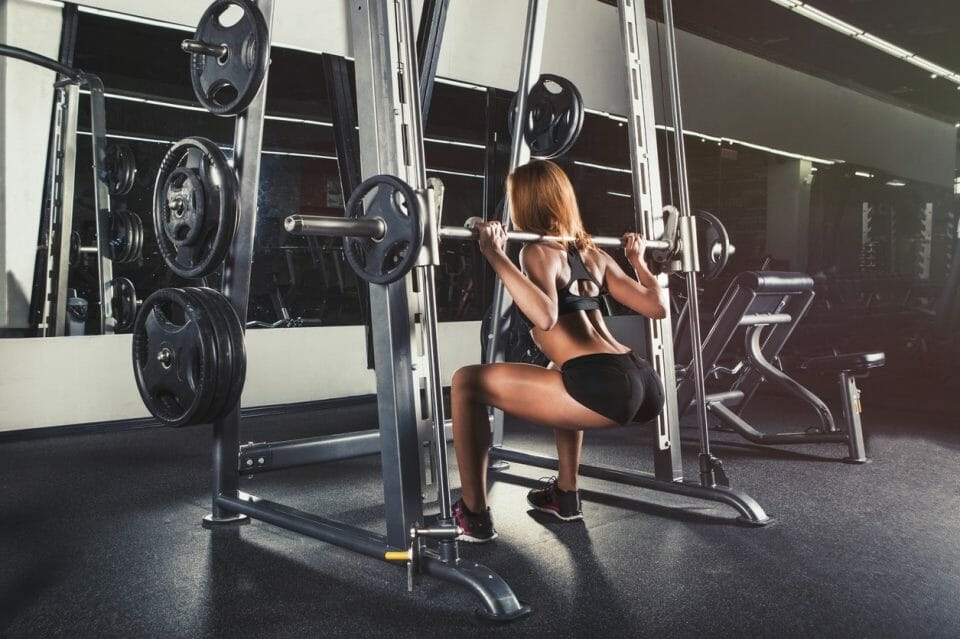 Smith machine is a strength machine for pumping a large number of muscles throughout the body. It is available in almost every gym. Someone considers it too primitive due to the motionless plane and non-functional due to the fact that it does not build abs. But others build buttocks and legs.

The machine is suitable for performing a variety of exercises, but the most popular squats in Smith machine, which correct the figure, and allow you to lose weight, and build muscle.

It is important to understand that the squats in Smith machine are primarily a load on the muscles. Accordingly, the result will be their growth and increase in volume. In particular, the emphasis is on the buttocks, quadriceps, and the back surface of the hips. Due to the neck, the forearms also work. Therefore, do not be surprised after a week of an impressive increase in muscle mass in these parts of the body.

This exercise is primarily chosen by male bodybuilders for pumping quadriceps, and women for buttocks. The latter especially benefit, since within a month the figure begins to change, beautiful reliefs appear.

For the purpose of losing weight, they are used only as an additional part of the program. To carry them out, considerable efforts are always required, which are always accompanied by burning calories, the effectiveness can be improved by performing them in combination with other exercises, diet and massage .

History of creation.  In fact, Smith machine was created by Jack Lalane, an American actor who was interested in bodybuilding. However, the manager of the gym, where the new machine was installed, was quick. He supplemented the model with improvements and launched into mass production. The result – it got his name.

Squats in Smith machine can be different. But if we take classic version, then the execution technique is following:

If the squatting technique in Smith machine is mastered and performed flawlessly, a quick muscle boost and reducing the risk of injury to zero will be a nice bonus.

Depending on what exactly you want to pump more, this or that exercise is chosen.

Squats on knees in Smith are rarely used. Most often – powerlifters and weightlifters. They give a load at an unusual angle and affect such parts of the body that everyone usually forgets about. The buttocks and hips, semi-membranous and semi-tendon muscles are well worked out.

One of the varieties of classical exercises in Smith machine is front squats, when the barbell is held not on the shoulders, but on the chest. They work out the abs, lower back and hips; reduce the load on the spine and knees; Develop balance and accelerate fat burning.

It is very important how the legs will be placed, as this distributes the load between the muscles.

Squats are especially difficult when you need to put your legs together – this increases the load not only on the outer surface of the hips, but also on the knee joints.

In Smith machine you can perform the famous Bulgarian squats on one leg (the second at this time is fixed on a hill), on which the whole load is concentrated.

Do the same with the other leg.

You do not need to combine different versions of squats in the Smith machine in one program, planning to pump all the muscles at once. This will result in excessive stress and a complete loss of strength. Set a goal – choose the setting of the legs – train according to the chosen scheme – achieve the desired result.

It is interesting.  The creator of Smith machine, Jack Lalane, was a bodybuilder, nutritionist, naturopath, led a healthy lifestyle. He claimed that nutritional supplements are harmful. He died in 2011 at the age of 96.

Squats on Smith machine for women

For women, squats in Smith are good for pumping buttocks. Here’s what trainers recommend:

Undoubtedly, squats in Smith are very attractive for women, as they give some of the best results for pumping buttocks. But you should not forget that there is always a risk of pumping hips. To reduce it, the correct technique is required. And preferably – under the supervision of a trainer.

Why are squats in Smith used by far not all athletes, despite their versatility? Along with the obvious advantages, this machine has disadvantages due to which it is bypassed.

Especially athletes are not happy with the fact of a one-joint training. That is, the knees work at full strength, and the hip joints and ankles remain inactive.

To perform the correct squat in Smith, it is not enough to study the technique – you still need to take into account the nuances that are usually told by experienced athletes and trainers. If you listen to them – the result can be obtained much faster.

Feel free to ask how to do them correctly if you do not understand something or have doubts. You can also look at oral steroids ranking chart Remember: not only successful muscle pumping, but also your safety depends on the accuracy of execution. Understand: you yourself can protect yourself from injuries.

What are Smith machine squat alternatives?

If for some reason you cannot work on Smith machine, this exercise has several alternatives, equally effective replacements with other squats:

Deadlift and leg press are also suitable, especially for men for pumping quadriceps.

Why does my lower back hurt after squatting in Smith machine?

If the technique of the exercise is correct, the lower back will never hurt. If this happens, most likely you are making mistakes:

If you correctly and regularly perform squats in Smith machine, after 2 weeks you can feel how the muscles of the buttocks, calves, arms, quadriceps are filled with pleasant strength and increase in volume. Do you want to pump your ass and make it as delicious as possible? Then this exercise is exactly what you need. And since it requires an incredible amount of power, during the workout you will lose enough calories, which will entail losing weight.