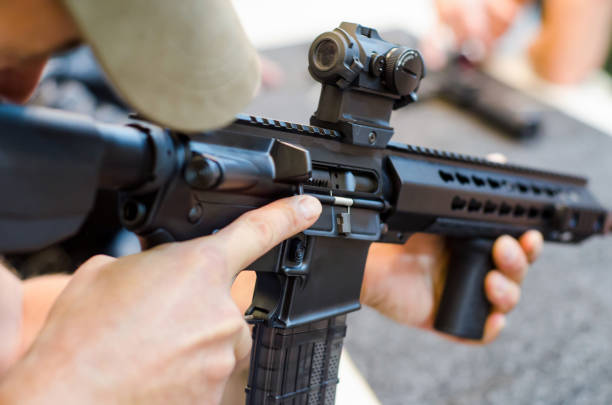 “There’s something wrong with the world today” Steven Tyler of Aerosmith sang, and he was right. The world might feel unsafe, but carrying a gun with the best pistol sight can help alleviate that feeling of helplessness. I’m all too aware of that helpless feeling, having been told my entire life that I must always carry a means to protect myself. The reality of how helpless we can be hit me hard a couple years back. One night walking to her car from work, my coworker at a local restaurant ran into a desperate man. Holding a gun, he demanded she give him her purse. Having no means of defense, and being quite young she complied. He ran away, and ended up dropping her purse, so the police were able to recover it. She was lucky in that situation, but some people are not.  I kept thinking to myself, what if it was me? What would I have done?  At that time I only carried a switchblade on me, but there’s a reason the saying “don’t’ bring a knife to a gunfight” exists. In that moment I decided I needed a gun. Not all robbers leave without attempted murder, and I couldn’t let myself be helpless.  So after years of shooting, I believe these are five reliable guns for any strenuous situation.

If the zombie apocalypse descends upon us, you will wish you had an AR-15. Because riffles have grooves etched into the barrel, the bullets that fly out will spin giving the shooter pinpoint accuracy. As a matter of fact, snipers use riffles to help them with long-range accuracy. AR-15 riffles are light semi-automatics making them good for firing multiple rounds, or facing multiple enemies. If you can get your hands on one of these bad boys you won ‘t have to fear home invasion ever again. That’s one reliable gun.

If you’re looking for reliable, the Colt 1911 is your guy, uh, I mean gun. You’re probably already with the Colt 45 from the lyrics “Colt 45 and two Zigzags baby that’s all I need”.  Part of the appeal of the Colt 1911 is the ability to concealed carry making it ideal for outdoor defense. It includes a grip safety feature, the typical mechanical thumb lock feature that together make it a good choice for the less confident gun wielder. Over all a handgun is the best way to defend oneself outside of the house, and the Colt 1911 is one of the safest.

There’s a reason the police have had the Mossberg 500 in there arsenal for years now. When it comes to reliable guns to consider any shotgun is a good choice. Shotguns have the ability to fire a number of different shells including bird and buckshot. You may have all of these on hand already if you are a hunter. In a small space a shotgun will take down an enemy without fail due to its wide range of shell spray. The Mossberg is a pump action shotgun that can fire 23 rounds of large buckshot without fail. This makes it a reliable source for self-protection against one, or multiple enemies.

Ah the good ol’ Glock. It’s a favorite of many regular Joe gun owners. The Glock 80 is a good choice being one of the smallest pistols of its class making it easy to store and conceal. Glock’s are handguns, which tend to have stronger recoil due to the shorter barrel. The heaviness of the Glock 80 lower will allow you to hold steady while firing on you’re attacker. This sturdy gun is a reliable concealed carry option for someone that isn’t used to handguns.

If you are someone that likes a little bit of old fashioned charm the Ruger GP 100 revolver will do it. You can get one that shoots five rounds or seven. It’s also another reliable option for inexperienced gun users. Being a full size barrel revolver, it will cut back on recoil, which can knock a first time user back a few feet. Less recoil also helps keep a smaller framed person steady while aiming. Revolvers are able to shoot bigger ammo, which will certainly stop any attacker. It’s not a concealed carry weapon, but it’s good for surviving in the wilderness, or home defense.

So as you can see there are quite a few options to protect yourself when impending doom strikes. I for one am counting on the zombie apocalypse to showcase my arsenal of survival skills. Any of these five reliable guns will get you through a slew of trying situations. Just remember to get your permit and practice your shooting first.

Richard Douglas writes on firearms, defense and security issues. He is the founder and editor of Scopes Field, and a columnist at The National Interest, 1945, Daily Caller and other publications.