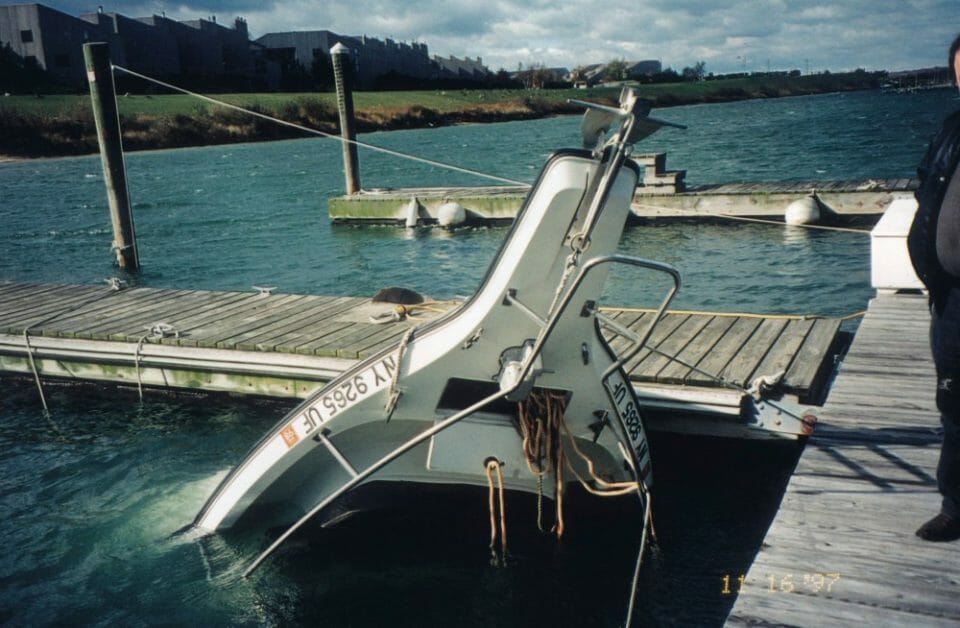 ALEXANDRIA, Va., June 30, 2014 — When a boat sinks, that’s likely the end of her. That’s because repairs on a sunken boat often cost more than the actual value of the boat. So if boaters want to prevent a sinking at all costs, what can they do? Boat Owners Association of The United States (BoatUS) recently took its first significant look since 2006 at its boat insurance claims files to identify the causes of boat sinkings and found that most were preventable. About two out of every three (69%) boats sink at the dock or mooring, while the remainder (31%) sink while underway.

Of all of the dock/mooring sinkings, 39% occur when some small part gives up the fight with water due to wear, tear and corrosion. When it comes to gradual leaks due to slowly failing parts, too many boats existed in a “zombie state” somewhere between floating and sinking, dependent upon the bilge pump, which merely postponed the sinking until the pump failed or was overwhelmed. This one is a no-brainer: lack of maintenance is the factor here.

For boat sinkings while underway, the most common cause (43%) is hitting something – a log, the bottom or colliding with another boat or dock. Some of these sinkings might have been avoided if some some extra care had been taken – and some can be chalked up to simply bad luck.

Interestingly, low-cut transoms that were common on boats in the 1990’s and a cause of sinkings is no longer much of a factor, as contained splash wells separating the interior of the boat from the transom are more common in boat designs today. However, being swamped while tied stern-to waves remains a cause.

To prevent a sinking, here are ten tips from the boat owner’s group:

Boat Owners Association of The United States (BoatUS) is the nation’s leading advocate for recreational boaters providing its over half-million members with government representation, services such as 24-hour dispatch, on water boat towing as well as roadside assistance for boat trailers and tow vehicles, feature-packed boat insurance programs, money-saving benefits including marina and service discounts, and vital information that improves recreational boating. Its member-funded BoatUS Foundation is a national leader promoting safe, clean and responsible boating and offers range of boating safety courses – including 33 free state courses – that can be found at BoatUS.org/courses.