Ambitious fishermen from all over the world come to Key West for a shot at the magnificent tarpon. Despite the incredible variety of fish species swimming around Key West, the tarpon remains one of the most sought-after targets and has attained almost mythical status. Massive, hard-fighting, and agile, the tarpon is easily one of the toughest game fish in the entire Keys area. There are certainly easier fish to get onto your boat, but the tarpon is just the right fit if you’re looking for high-octane adventure. 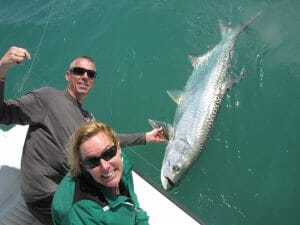 There are many reasons that the tarpon has earned the nickname “The Silver King.” The king part of the moniker comes from their sheer size and their domineering nature. Depending on their age, tarpon range from 4-8 feet in length and can weigh anywhere between 40-200 pounds. Tarpons weighing up to 300 lbs have been discovered, but the average weight is somewhere closer to 100 pounds. Needless to say, they’re at the top of the food chain and can eat just about whatever they want.

The silver half of the nickname comes from their overall appearance. The dark, bluish-green color on the tarpon’s back quickly becomes a luminous silver along the sides. Along with their tendency to swim in fairly large schools, the tarpon’s bright colors make them easy to spot once you’ve entered their area. The mouth juts sharply upward, giving the tarpon a brutish look and adding even more to their legendary status.

The first prerequisite for catching tarpon is knowing where and when to find them. Tarpon is most plentiful in Key West from March through July, with large schools often found swimming close to the surface in Key West Harbor. They’re also commonly found in the shallow flat waters, where hardy anglers pursue them with spin tackle or fly fishing techniques.

For bait, chumming is a popular way to get tarpons to swim near your boat. Once your chum line has caught their interest, you can persuade tarpon to go after both live and dead bait, with crab, mullet, and shrimp being among the most popular. But when a tarpon strikes, you’ll definitely have quite a fight on your hands. They’ll fight you tooth and nail for a long time to stay in the water, so you better be prepared for an endurance test if you’re interested in landing one of these beautiful monsters.

Captain Experiences makes booking a fishing trip painless: no more searching for weeks and playing phone tag. They’ve connected with guides all over Key West and offer over 15 different Tarpon fishing experiences on their site.

The top tarpon guides in Key West are Captain Scott Gordon of Too Lethal Charters and Captain Pepe Gonzalez from Seize the Day Charters. With close to half a century of experience between them, Captain Gordon and Captain Pepe will get you onto a tarpon faster than anyone. They know exactly where to find this monstrous fish and how to help you catch them. A day fishing with either one of these men is sure to be filled with amazing tarpon adventures and a treasure chest of memories.