Article Provided by: Dante Zúñiga-West
From his blog: Backwoods Blaxican

If you were timely enough to score a first-come, first-serve spring bear tag this year then there’s only one thing on your mind these days: Ursus Americanus, a.k.a. black bear.

Oregon is the place to be if you’re a bear hunter because it is where approximately 30,000 bears inhabit 40,000 square miles of territory. Oregon Department of Fish and Wildlife (ODFW) issues 4,000 tags for the SW spring bear hunt. ODFW intends for the hunt to help maintain black bear populations in southern Oregon. The SW spring bear season opens on Monday, April 1.

There are plenty of bear in southern Oregon but don’t let the numbers fool you. If you plan to have a successful bear hunt this year you can’t spend these last couple weeks before the season opener sitting on your couch. Put down the Dorritos, dig your hiking boots out of the closet, make peace with your significant other and get in the woods. You aren’t going to cross paths with Yogi by accident (that only happens when you’re deer hunting). You have to get out and scout.

To fill a SW spring bear tag you have to hunt in southwest Oregon, which is where we went to scout. It was me, native Oregonian Jake Norton and a truck full of camping gear. The goal was simple: traverse a series of notoriously remote backwoods roads that snaked through prime bear country, set up camp, and start looking for bear sign.

For the hunter accustomed to stalking fall bear in northwestern game units, southwest Oregon presents an entirely different landscape. It is dry, red-colored earth spreads out beneath fir trees, and there is wide-open space for miles. This is perfect for bear hunting because a great deal of a bear hunter’s time in the woods is spent behind the “binos,” glassing far-away slopes for black dots. Eventually one of those black dots moves, and you realize it’s a bear… that’s when the fun starts. But there would be no such fun on this adventure. It was a reconnaissance mission through and through. By the time we got to the mouth of the trail system we would be scouting in, it was early afternoon and we were greeted with a friendly sign that let us know just how deep in the bush we were venturing.

Boots on the Ground:

Traveling on forest service roads deep into no man’s land is a bumpy, unpredictable experience. After making our way around fallen trees and boulders, careful not to pop a tire or hit a log, we came to a closed gate. From there it was packs on the back and boots on the ground. We were met with the challenge of snow, which pretty much cut our chances of finding bears or bear sign in half. Oregon’s spring bears aren’t usually very active until the snow begins to melt and their food sources thaw out. Slightly discouraged, we cut across a ravine to another series of old logging roads and set up camp. We spent the fast-approaching evening consulting our maps. We planned for the morning and cooked a delicious fireside meal that consisted of turkey chili, more turkey chili and some cheese tortellini from a military MRE (meal ready-to-eat) pack.

When morning came we started climbing. For the record, this is the part where I discovered that Norton is part mountain goat. Keeping up with him was a humbling experience, and I am far from out of shape. 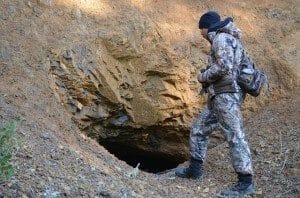 The best place to look for bear early in the season is on south-facing slopes where the snow melts first. We crested a ridge and glassed slopes for hours using powerful binoculars and a spotting scope. The snow told stories. Animal tracks crisscrossed and faded. Norton and I followed coyote tracks to where some unfortunate chipmunk or squirrel made its last stand. We found old bear tracks, and tons of deer sign. But no bear.

Walking the ridgeline and dropping into another drainage, we found an old mine. I clambered up to peer inside, hoping to find bear sign. What I discovered was the wooden carcass of a dilapidated mining cart. Our trek back to camp would have been disappointing if it weren’t for the fact that we were still surrounded by an absolutely breathtaking expanse of white-capped wilderness. The bear weren’t out yet and we’d have to try again in a week or so.

The Things They Didn’t Carry:

The drive back was as pleasant as it could be considering that we had to return to civilization. We ran down a checklist of things that would make a long hunt in that country easier.

1.     Moleskin: because blisters are real and boots can be unforgiving.

2.     Diaper ointment: when the weather warms up, poison oak will run rampant. Sure, you should learn to identify poison oak and stay away from it, but just in case… this stuff helps.

3.     Wind checker: you should always have one of these with you, even on a scouting trip. Knowing which way the wind is blowing and what time of day it is blowing that way can be the difference between tag soup and a big bear. Bears have an incredible sense of smell, and you must heed this at all times. Your local rod-and-rifle store should carry wind checkers, but if you want to go DIY you can get a squeeze bottle and fill it with some unscented talcum powder.

The most important thing to carry with you into the field is fierce determination. Mother Nature doesn’t give up one of her own without dishing something back in return. If you want to hunt black bear in southwestern Oregon, you will need patience and persistence. Get out there to scout. Keep watching those slopes.