You are here: Home / Latest Articles / Shooting Sports / Paintball Strategies and Tactics that will Help you Survive in the Game 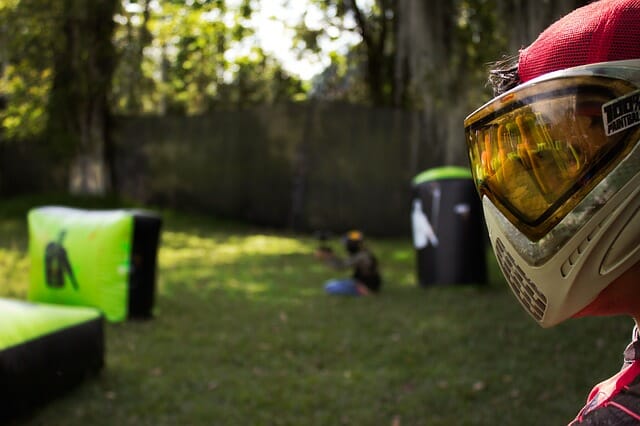 Paintball, developed in the 1980s is a game that involves eliminating opponents by hitting them with breakable, dye-filled gelatine balls or pellets shot from carbon dioxide or nitrogen powered paintball markers.

Recently it has become increasingly popular and has achieved the position of a professional sport. It requires practice and use of military-style strategies.

For beginners, safety tips and fair play lay the foundation for surviving in the game. They are not very useful in improving game play, but it’s necessary you learn them so you can play with serious players.

Though it is a painless and mostly harmless game, the paintball may travel at around 280 miles an hour and if it hits, the sting may not be sweet! So, the two main points to keep in mind is that never remove your mask while the play is on and make sure you unload your gun and remove the tank after playing. Make sure the guns are away from little kids.

If you’re out, you’re out. Never pretend otherwise, it is a serious offense here and you may never be invited to another game.

Never call a senior player a cheat. Back off if you find anything fishy. Such players spend a lot on building a reputation and will not take kindly to allegations.

If you aren’t sure you are dead, request for a paycheck and let the referee make the final decision. Also, check out the different types of Paintball matches you can play at Paintball Pick.

For single players, making decisions is an important part as you have no one to fall back on. With a cool and confident head, decide about your cover and mobility.

This is the easiest way to escape being hit. There are few hiding places in paintball and you must avoid the obvious ones. The more you avoid open spaces, the more difficult it will be to get you.

Make sure the ball is in your court (pun intended). Change from cover to cover; camping out for too long will make the opponents easily guess your position and flank you! If you fire on the move, they will be busy dodging and will fail to corner you.

This trick works both ways – lack of confidence leads to panic and throwing away the game whereas too much of it will lead to exposure and end up killing you!

Get to know your teammates better for the ultimate mantra for teamwork is the 3C mantra- cooperation, coordination, and communication.

This involves splitting the team into two squads. These squads again may be of use in two different ways.

This method requires one squad to move ahead while another stays back to give cover fire. It requires supreme coordination but helps the team gain ground within minutes. However, the squad that moves out front risks being caught in the heavy crossfire.

The second style involves the “leapfrog “technique. One squad moves forward and secures position while the other squad provides cover fire from behind. Then the frontline squad lays down cover fire so that the other squad can move ahead and secure a new position. This is a test of speed and communication- make sure you share a good rapport with the squad leader!

Team Free for All (FFA) Tactics

The game has a plethora of variations and in quite a few of them you have to act independently without any communication with your teammates. These rely mainly on the “last team standing” style and hence it is essential that you have a good chat with your teammates prior to the match. The main mistake made here is “friendly fire” but even this can be solved with good communication. Make sure you have the position of all your squad members etched deeply in your mind to avoid hitting them!

Certain variations of paintball include a medic; a player especially skilled in dodging paintballs. In these variations, players have a predetermined number of “heals” and they remain on ground if they have even one heal left. The medic is assigned the job of locating his wounded mates and heal them by touch. If the medics are hit, they are eliminated alongside the wounded players. It would be intelligent to not rely too heavily on the medic. Rather an extra medic should be deployed to protect the other medic and kill the opposing team’s medic.

The numerous variations include Assassins; Capture the Flag, Centre Flag Push, Bomb, Team Deathmatch, Predator vs. Prey and V.I.P as the most common ones. Though an easy game, even this requires a skill. So, my friend, dodge the ball and win the game!