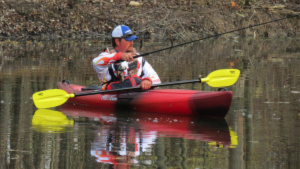 When man first crossed over the Bering Strait and began to settle North America he brought with him the kayak. It was nothing more than animal skins stretched across a wooden frame.  The fragility of this craft no doubt cost some lives.  But it was portable and could portage ice pressure ridges.

Fishing kayaks are no longer a means of transporting people across arctic waters or down raging rivers. Anglers are turning to the kayak as a lean mean fishing machine.

The modern kayak is for all waters and particularly for the angler in search of quality fishing time. They come in a variety of lengths and widths and made of a variety of plastics, nylon and fiberglass.  Some are best for running fast river currents while others will stand the rigors of ocean travel.  The seating also can vary from one placed on the bottom of the hull to those with a mesh armchair like apparatus.

Kayaks will never replace the bass boat for travel and stability. But there are places where the fishing kayak reigns supreme.  This might come in backwater coves, bayous or a farm pond.   In other words they are great for “skinny water.”  Kayaks come in a variety of models with relatively low price tags that make them an affordable option for the crappie angler.

Tournament anglers are turning to kayak divisions in such events. They compete in their own divisions.

Modern kayakers have adapted many of the features of power boat angers to their crafts. There are mini-power pole units just like the normal size ones.  Water tight storage areas, live wells and pole racks can aid in the storage of tackle and rain gear.

Today’s kayak constructed of manmade materials is much safer. Some are even available in inflatable models.  Their crafts are more stable thanks to wider beams and built in floatation systems.  Topside water-tight compartments permit the stowing of gear and rod holders.  Additional gear can be attached using bungee cords.  For the angler there are kayaks with live wells and numerous racks for additional rods.  It is usually heavier than its predecessor and some even have carts that allow one to wheel the craft right up to the shoreline.

The inflatable kayak provides a “luggable” aspect to construction. Usually constructed of PVC-vinyl they have a reinforced underside.  They are ideal for quick trips after work.  Once the fishing trip is over, the inflatable can fold into an easy loading rolling travel bag with a high capacity hand pump or an optional powered one.

The addition of comfortable low profile chairs with mesh seating allow anglers to sit comfortably while fishing skinny water and gliding over brush, weeds, snags, laydowns and rocks. The ones have decks wide enough to allow for the fly anglers to stand up to cast while maintain stability.

Kayaks allow one to have access to bodies of water that hold fish, but do not have boat ramps such as a farm pond or a small creek. It also allows one to access waters beyond small openings in the reeds or that would otherwise require portaging over shallow riffles.  Skinny water is often over-looked by those who do not want to get weeds and junk in the props of their motorized craft.

In addition to the ease in preparation for a day on the water, they are relatively maintenance free and there is no fuel needed. They are easy to transport in the bed of a pick-up.  Anglers find that they end up going fishing more often even if it’s only for a couple of hours after work.

The lack of mechanical power limits the speed and range of the craft. If fish are not biting in one spot it may mean reloading the kayak and driving to the next honey hole.  Another limitation is they do not allow one to carry as much gear as would be the case with a larger craft.  Stability may become an issue.  You will never find one as stable as a bass boat.

Despite the practicality of the modern kayak, one still needs to consider safety precautions on the water. The PFD (life preserver) is mandatory on some waters but essential for all water.  It is important to go out with at least one other person for safety’s sake.  Kayakers need a certain level of physical conditioning and ability to swim with confidence.

It is also advisable to have clothing that dries quickly. A dry bag can be stored on board either in below deck compartments or on deck with the use of bungee cords.  The dry bag also doubles as a storage compartment for valuable electronics.

Regardless of its limitations, the kayak is a lean mean fishing machine.