You are here: Home / Latest Articles / Outdoors / How To Execute Knife Throwing Safely Outside? 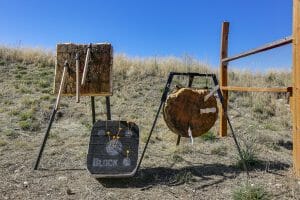 You’ve just finished an Expendables marathon and you’re feeling like the next Lee Christmas. That is until you stick that knife somewhere it shouldn’t be. Don’t let that put you down though, you just need to learn the right technique and practice it enough. Preferably not at a human target, not right away at least.

Knife throwing, or impalement arts, has become quite popular in the 19th and 20th centuries. It was a show off for skill and accuracy, where a thrower hurls his knives breathtakingly close to a human target. It’s still quite as popular today, practiced as a sport that’s full of both fun and adrenaline. You can avoid accidentally taking out anyone’s eyes out with some tips and practice, just how Michael Pearl’s Knife and Tomahawk Throwing for Fun DVD shows you how to perfect just the right technique to throw your knives.

The Science of Throwing

Like darts, the goal in knife throwing is to hit a target. However, knives do not travel through the air like arrows. As you swing your arm toward the release point, you impart two kinds of motion to the knife:

Physics then explains to us the path the knife takes: A revolving object that suddenly breaks free will continue to move in a straight line tangential to the point at which it was released. For this reason, the release point for a knife throw occurs much earlier than most people expect – at the top of the arc, not at your arm full extension. If you let go at the end of your throw, the knife would instead fly into the ground.

Once released, the knife flies toward the target at a speed averaging between 26 and 30 mph (42 to 48 kph). If you’ve brought all the throwing elements together properly, then the knife completes its rotation just as the business endpoints perpendicular to the target.

Some other factors come into play when throwing a knife, like its weight, the distance you throw it from, and your form when throwing it.

Good-quality throwing knives are forged from heat-treated alloy steel, and they can last a lifetime. Other qualities a good throwing knife would have are:

As a beginner, go for simple designs without embellishments. This will help you learn to throw more accurately and plain knives are easier to throw.

How to Hold a Throwing Knife

A lot of people will adversely hold the knife so that their thumb is on the side of the knife and will release it so that the blade is vertical to the target. Instead, you may want to try this method:

How To Throw a Knife

There are three kinds of knives you can use for knife throwing: handle-heavy, blade-heavy, and balanced. Most professional throwers use a balanced knife, however, if you’re just getting started, go for blade or handle heavy knife. They have a much easier learning curve than a balanced knife.

Whether you throw by handle or blade, whether your preferred missile is a knife, ax, tomahawk or some other pointy object, the basic rule of throwing is the same: Grip the light end and throw heavy-end first.

Here’s a basic outline of the steps.

They key is to be very consistent. When throwing the knife, you must release the blade in exactly the same way, and at exactly the same position, every time. Once you determine the distance (between the release point and the target face) that results in a stick, make sure to toss from that distance each time.

As we’ve established, you need to start practicing to improve your odds of landing shots. Avoid using trees, as repeated knife wounds will kill it.

Instead, you can build a target from a soft wood like pine, with the grain running vertically to permit easier sticking. You may also lay ¾-inch-thick planks side by side, mount them on a large 4- by 8-foot sheet of plywood, and then mark your target with five concentric circles. Or you can look up any of the DIY targets to create yourself.

The way you place your target is very important. Find an open area where you can see at least 30 feet in all directions, or set your target against a long continuous wall with no doors and windows. Since missing the target will cause your knife to hit the ground, a hard surface will be hard on your knife. Instead, throw on grass, and keep the growth short. That way, if the knife falls and buries itself in the dirt, you’ll be able to find it easily.

So you might ask yourself, “Why do I need to learn knife throwing?” Well, it’s pretty obvious, isn’t it? Because why not! Knife throwing might just be the coolest skill you can show off, and it’s super fun once you get to master it. Not to mention that you’ll be able to cleave razor sharp shiny things through the air when you’re done. (And actually hit what you were aiming at). If, however, you’re looking for serious reasons to learn knife throwing… then how else do you plan on fighting off the zombie breakout?