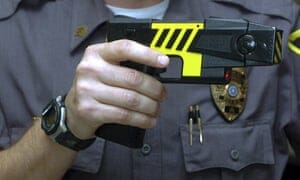 The use of personal defense weapons and equipment is no longer limited to law enforcement professionals. Even common people own them and sometimes use them to protect themselves from criminal attacks. When it comes to the use of such weapons, stun guns are seen as a better alternative to firearms. This is because stun guns are capable of protecting you but do not have lethal repercussions. The real concern is whether a gun that just delivers an electric shock would be effective enough to ward off danger. Here are a few facts that will address this concern.

Stun guns work on the principle of delivering an electric shock to the victim to stun them for a few seconds and leave them temporarily disabled as well. Though the shock may last from three to five seconds, it is usually good enough to save you in a dangerous condition. You can even shoot from a distance and the attacker will still be immobilized due to pain and shock.

You need to shoot at the right spots

The effect of the stun gun greatly depends on choosing the right areas to shoot. Aiming for the front and lower torso is the best idea because the opponent will not be able to stand up once hit by the shot. Other effective response areas include the back, hip and shoulder areas. Avoid face, neck, groin and spinal areas because a shock here can cause permanent damage.

The fact that stun guns are compact enough to carry in your pocket makes them ideal for self-defense. The opponent will not even suspect that you are carrying a gun like Taser Pulse, which means that you can easily catch him off guard. Any self-defense move that happens suddenly is more likely to disable the opponent and keep you safe.

When it comes to the efficacy of a stun gun, correct usage makes all the difference. Therefore, you should have enough practice of using it so that you can use it properly when the danger is real. Start by going through the features of the gun and learn how to arm and disarm it. Practice for aiming and pulling the trigger is equally important. Knowing your weapon and its usage makes you a lot more confident and capable of handling danger better.

It does not kill

Despite the efficacy of a stun gun, it does not kill. This is important because you would want to protect yourself by disabling the attacker temporarily rather than killing him. It is just meant to stun and scare because just seeing a gun may actually dissuade an attacker. Moreover, the electric current that these guns deliver is safe and discreet.

Besides these facts about stun gun effectiveness, another important thing to consider is that the results may not be the same for everyone. It may take a greater voltage and longer exposure to disable a larger attacker as compared to someone with a lighter frame. The choice of the right stun gun is another factor that impacts its effectiveness.

Tags: How Effective Are Stun Guns