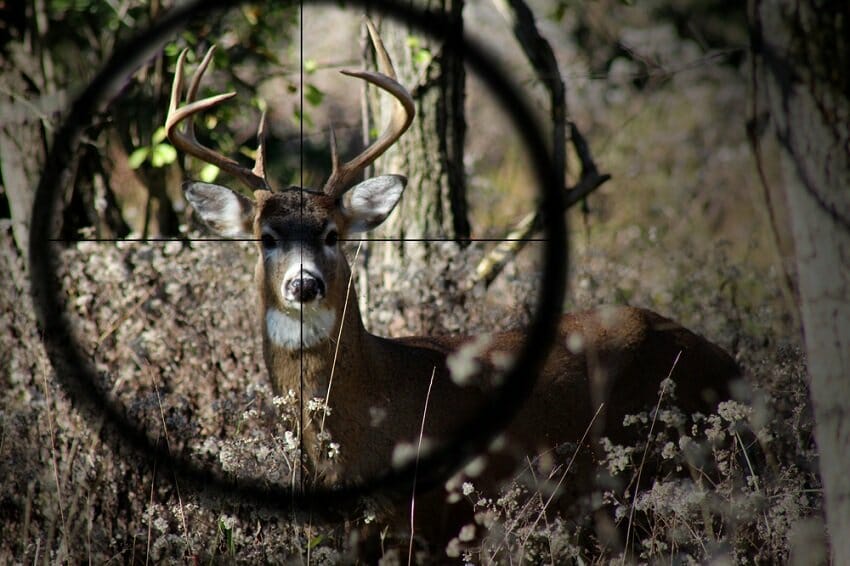 There’s no denying that magnified optics give a hunter a distinct advantage. Not only do optics simplify the aiming process and allow for greater infield accuracy, but their magnification also allows you much greater precision in a more reliable kill at range.

That increased capability doesn’t come without sacrifice, parallax weight in bulk, and even the possibility of your sole aiming reference coming off zero or breaking in the field. Optics have taken evolution over the years to mitigate most of these problems, but the argument still remains whether fixed or variable scopes are better for hunting.

While neither is going anywhere anytime soon, both offer distinct advantages and disadvantages when it comes to using them for game, in the field. Here are some tips and tricks to determine which one you should choose, fixed versus variable scopes for hunting.

Variable power scopes offer the biggest benefit of being you to tailor the amount of magnification you are viewing through your scope, to the shot you have at hand. The range does not always determine magnification. It’s a common misconception that the further out you need to shoot, the more magnification you’re going to need.

This normally holds true but for small game hunters, this advice can be a little off. No matter what range you are hunting them, ground squirrels are a small target. If you are hunting in the long-range, 100 yards and on, you’re going to need as much magnification as a deer hunter who would be hunting at 5 to 700 yards.

Of course, if the target presents itself closer, or an animal that is much larger than you thought you would be hunting that day presents itself, having variable magnification allows you to tailor your scope to that particular shot.

On the other hand, variable magnification scopes complicate just about everything. Oftentimes, they are harder to sit in, they require parallax adjustment, and they are bulkier and heavier as well as more complicated.

Many deer and hogs have led to see another day as hunters walked into their stand with your crossbow scope set on high magnification, not being able to get off a shot fast enough on an animal that was bumped on the way into their stand.

Fixed power scopes have, by definition no adjustment and the amount of magnification they offer. This offers the benefit of not only being lighter, and less complex they can also be more compact and cheaper.

Fixed power scopes often have little more than adjustable turrets to sight in the scope and the main body. This makes them slimline and easy to carry as well as not having any learning curve to use. Having a preset parallax means the eye box of the scope will have a more forgiving window as well as be much faster to acquire snapshots.

For people who have not used a fixed power scope before, they offer a much more forgiving experience that is great for beginners and for rifles that will be used under stress. Even for plinking, you don’t want to have to adjust a scope each and every time you pick it up so I fixed the power optic makes perfect sense.

Combined with the fact that many fixed power scopes are now incorporating red dot reticles you have the perfect mix for a short-range, lightweight carbine optic made for hunting in thick southern swamps or northern evergreen forests.

When choosing a hunting optic you’ll most likely need to determine the job you have at hand to decide whether or not a fixed or variable power scope will work in your situation. Your preference might likely come down to personal preference, but the three main categories that separate the decisions for most people are as follows:

Fixed power scopes are almost always cheaper. This is because they are easier to assemble, have fewer overall materials, and are often part of the manufacturer’s cheapest lineup of scopes. This isn’t necessarily a bad thing, in many situations where a fixed power scope is likely to shine, premium optics and extra hardened construction are normally needed.

Using a fixed power scope is an excellent way to save money when assembling a new hunting rifle. You often get better performance for the money spent as compared to variable power scopes which require more money to produce.

While fixed magnification scopes will tend to be smaller both in length and height, is going to largely depend on the magnification range of your scope and the objective Bell. For rifles where size and weight are paramount, fixed power scopes could be an excellent option for those who are familiar with the area that they are hunting in and the ranges that they will encounter game.

For example, hunting with a light carbine with hundred yards for hogs over bait is a great situation to have a fixed power scope. However, chasing down a trophy bull elk in the Rockies is a different proposition that will most likely call for the capability of a variable power scope.

The weight of your Riflescope does affect how effective your rifle is going to be in the field. The overall balance and weight of your rifle will affect how quickly you can shoot, and how accurate you can be with your rifle off the bench or rest. Not to mention, carrying a lighter rifle is going to lead to less fatigue in the field overall allowing you better conditions when that pivotal moment comes in you get to take a shot.

Carefully consider how much weight you are willing to carry, is going to be different for everybody and may even differ on the conditions of the hunt you are going on next. Variable magnification scopes will almost always be heavier than fixed magnification, and whether or not the attic capability of a telescopic optic will be worth it, in the end, will depend on your preferences, experience, and situation.

In the end, variable power scopes are always going to provide greater capability and likely increased effective range for the average hunter. While variable power scopes offer distinct advantages in some situations they do lack of performance in terms of raw features and ability to bring your target closer.

Hands down, however, the best Riflescope won’t do you any good in your gun safe. Make sure you get the best scope for your particular tastes and situation and get into the field!