For the purpose of this comparison, we have used the Pulsar Helion Thermal Monoculars, comparing it with the Pulsar Accolade Xq38 or XP50, which are thermal imaging binoculars.

When it comes to physical differences, both of the devices are same in terms of display, electronics and resolution, as both of them use the same sensor. When it comes to functionality, they are also very similar, albeit the fact that monoculars require just one eye while binoculars are for both eyes.

When comparing sizes, we can clearly see that the Accolade models are generally two times bigger than their Helion counterparts. Thermal imaging binoculars are also shorter in size, and use a central knob for adjusting focus. This function is similar to some classic binocular models. The focusing function of the Helion models on the other hand is controlled by a wheel around the objective lens. 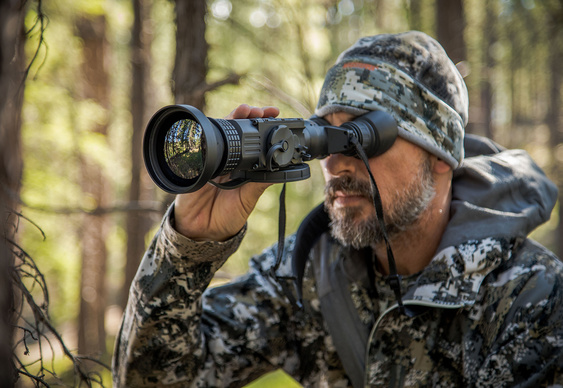 Both thermal binoculars and monoculars have diopter settings which can be adjusted from the rear part of the devices. Both of the eye pieces are fitted with a diopter adjustment wheel, which can be used to fine-tune the image to increase its clarity.

The practical applications of binoculars and monoculars differ greatly from each other. Generally hunters tend to observe things with only one eye, which automatically adjusts its pupil to the brightness of the display. It should be noted that the pupil of the other eye remains wide because of the low light environment in which hunters usually work. Monoculars are thus used as an observation tool in a riflescope and are used for shooting. 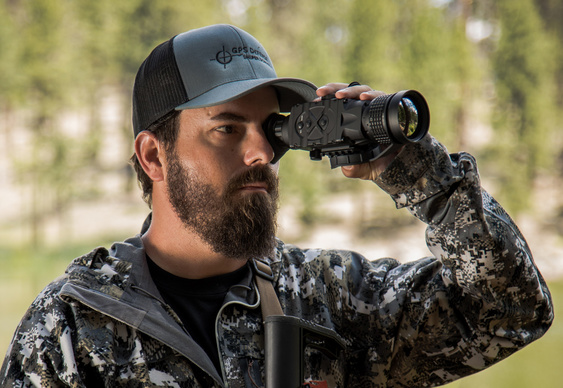 Thus, as it stands, hunters are benefitted more from thermal imaging monoculars. The main issue with thermal imaging binoculars in this case is that the pupils in both eyes adapt to the brightness of the display. This makes quick transitions back to lowlight environments, very jarring for the user. Since time is precious while hunting game, and the slightest of movements can startle it at any point, the couple of seconds needed for both the eyes to get accommodated to the darkness is unfavorable to the hunter.

Another major factor to consider is the tendency of some people to get confused or experience disorientation if one of their eyes receives a bright image while the other does not. Many people can experience discomfort from the contrast between the amount of light each eye is receiving. In such cases, customers should go for thermal imaging binoculars instead of monoculars.

Thermal imaging binoculars take the cake when it comes to comfort and ease of use. It is only natural for both the eyes to receive the same image with the same brightness. Binoculars do not tire out the user’s eyes as compared to using a monocular. Many thermal imaging binocular models like the aforementioned Pulsar Accolade XP allow users to adjust interpupillary distance, similar to classic daytime models. Of course, one should not forget that binocular users have to wait a few moments longer before their eyes accommodate back to the low light.

When discussing the price factor, we see that thermal imaging monoculars are significantly more affordable than binoculars, despite depending on the product generation in use. Thermal imaging binoculars on the other hand, tend to be more expensive because of the presence of two screens or a whole system of lenses in some cases. The price difference, however, is smaller in comparison than the difference between digital and analog night vision devices.

In the end, it really comes down to the personal preference of the user in question, with all the above factors serving as additional considerations for the option you go for.