With the end of all of the Illinois deer seasons wrapping up yesterday, I spend a minute and reflect over what was accomplished threw the whole season.  I look back at the summer and remember setting several goals for myself just for deer hunting.  They ranged from breaking in a couple longbows I built the year before with their first kills and up to spending more time with my kids hunting.  I wanted to try ground hunting and really spend time studying my herd and learning every deer and route they took.  This was also going to be the year I finally got that food plot put in.  Now that the season is over, I realized that of all the goals I made for myself, I only accomplished one of them.  But it was the most important one of them all.

I was able to learn some about my deer with using trail cams more.  I did try and break in those longbows.  Try is the key word there.  I never had the time or funds to put in a decent food plot.  But the one thing I did do was get my kids more involved into hunting this year.  If I had to choose one thing to accomplish for my long list of goals.  That was it.

I have a 10 year old daughter and a 7 year old son.  My daughter always says she wants to go with me, but when the time comes, she doesn’t feel like it.  I will never push my kids into anything to early, so I let it go and figured when she is ready, she will let me know.  Now my son on the other hand, wants to do nothing but sit in the woods and hunt.  I started taking him out with me last year on a few hunts.  Always on the ground and sitting in a blind.  He would get excited when we saw a deer a mile away and call it a successful hunt.  So I knew making him wait a few more years to hunt was going to be hard.  I wasn’t sure if he was ready and he hasn’t been able to get his Hunter’s Safety card yet since he really couldn’t read and take the test yet.  So I would teach him all I could with hands on.

Since my kids were old enough to pull a trigger, I had them shooting guns.  Nothing big of course, just something that made noise and made a hole in a can.  Starting out with a 22 and then a 223.  Even some days I would let them shoot my .357 just so they can feel it.  Earlier this summer my son Aiden wanted to step up into bigger guns so I pulled out his great grandfather’s Montgomery Ward single shot 410.  He was excited to say the least.  The gun was to big and to heavy for him, but with some adjustments, he hit what he was aiming at.  He was determined to shoot the big guns.  The whole summer while we are out shooting, I am watching closely and teaching both kids everything I know about handling a gun correctly, being patient while aiming and slowly taking a shot.  I am not a “in a pie plate will kill it” kinda shooter.  I want to know exactly where that bullet is going to hit and I waste a lot of money on ammo for all my guns trying to find that one combination that works best with that gun.  Accuracy in my mind is very important with hunting and I will push that on my kids.  I said before that I won’t force anything on my kids, but when it comes to guns and shooting, its my way or no way.

After a summer of shooting I decided both kids were physically and mentally ready to hunt.  With a recent new law in Illinois with giving the ability of a resident to get a hunting license without having a Hunter’s Ed card, I was able to get both kids a hunting license and a deer permit.  Now the fun begins.  What are they going to shoot?  I have a Encore Muzzleloader and Mossberg 20 gauge.  Neither of them wants to shoot the 20 gauge because it kicks to much.  I set the Encore with 80 grains of powder so they could practice and they both liked that.  So the decision was made that when the youth deer season came up, I would take one of the kids with the Encore and my dad (their grandpa) would take the other with the 20 gauge.  The morning came and my daughter decided she wanted to sit with grandpa which made the whole decision easy.  I was expecting a big fight on who got to sit with who.  So after getting both kids and myself ready, we scrambled out to the woods where my son and I sat in our new two person ladder stand and Grandpa and my daughter went and sat in a platform stand 300 yards away.  In a previous story you can read what happened, but 30 minutes into the hunt, my son had a 10 pointer on the ground and my daughter was ready to go home.  She was done hunting for the year and he was ever so hooked. 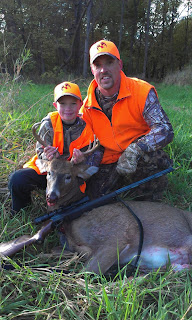 So now I am in trouble.  Have you ever had your hunting dog get all excited when you pull a gun out of the cabinet or grab coveralls you always hunt in?  That’s how my son is now.  I have to sneak out in the mornings if I want to go hunting by myself.  Daddy needs his alone time.  So my new goal for this year is new tree stands.  He wants to go more and more and I need more places to sit.  So this year he will learn how to pick a tree and stand placement.  Hopefully his sister will join us.

Any Hunt With Your Kids Is A Successful Hunt