On July 22nd I met a buck that I took an immediate interest in.  I knew he wasn’t done growing yet, but I liked what he had to that point.

My property used to be overrun with cows…and previously with hogs.  The damage they did to the timber is still visible.  Worse than the cow and hog damage is the carnage left behind by the property’s previous owner.  If a tree was worth a few dollars and could be easily reached, it was felled and sold.  Needless to say, I have very few mature oaks.  I do, however, have plenty of tree tops strewn about the timber.  So what does this have to do with a particular deer I became interested in?  Plenty.

With very few mature oaks in the timber, I have very few acorns that hit the ground.  This year a couple of the oaks that survived the previous owner have been dropping acorns like crazy.  One tree in particular.  I placed a single trail camera there to see what the oak attracted.  Wow!  An almost constant parade of deer…95% of them were bucks.  Even better than all the action was the fact that I had several daytime pictures.  I watched several bucks approach that oak almost daily.

As the days passed, I watched as my buck of interest grew taller and taller.  With every picture he posed for, his habits became more and more obvious to me.  I figured for sure that he would turn nocturnal right before the season opened as mature bucks so often do.  As it turned out, he was still making occasional daytime appearances.  Nothing predictable, but he was showing up before dark.

I figured if I was going to take this buck, it would have to be in the first few days of the season.  After that I was sure he’d be onto me, no matter how careful I was.  Day one (morning and afternoon hunts) I hunted the edge to see if he’d come out with shooting light left.  He didn’t.
Day two I changed my plans.  I had the prefect SSE wind required to hunt an area where I felt he staged prior to coming out.  The trick was getting in undetected.  I can’t remember ever walking so slowly to a treestand.  On this 2nd day of the season, same as opening day, I was graced with my daughter as a hunting partner.  Our family rule is, when you get into your treestand and are safely buckled in, you text Dad letting him know all is well…usually followed with a polite “good luck”  or “stick a good one.”

As I approached my stand, I felt pretty good about getting in totally undetected.  I climbed into my stand, buckled up, and wondered why my daughter had not yet texted me since she left for her stand about 5-10 minutes before me.  I nocked an arrow and retrieved my phone from my pocket.  “I’m in” I texted her.  The time was 5:26pm.  A few short minutes later, I caught movement.  Movement heading my way.  As I readied myself in case it was my buck, I felt my pocket vibrate.  Thankfully I had my phone buried deep.  When the deer was about 40 yards out, I saw rack.  My first thought was that it was a particular buck my daughter wanted.  Fumbling with my left hand, I tried to turn on my bow-mounted video camera that my bride bought me last Christmas.  I wanted to get some video of her buck.  Then he stepped out of a clump of saplings and noticed it was my buck.  The one buck I wanted this season.  It’s amazing how your heart rate changes when you go from spectator to bowhunter.  Still fumbling around to turn the camera on without looking down at the bow (a previously rehearsed maneuver), I became frustrated.  Dammit.  I looked down to find the switch and noticed that my entire camera had fallen off its bracket on the way to the stand.  I still had the bracket, but no camera.  It didn’t matter much at this point, it was time to draw.  I almost hate to admit it, but this buck made it easy.  He walked at a snail’s pace right through a years old 6-foot shooting lane at 20.5 yards.  The arrow hit its mark, though a little lower than I wanted.  However, a low hit in that leg pocket, followed by a tail-tucked hard run usually means only one thing.  Heart shot baby.  He ran about 60 yards, through my completely dry creek, and stopped.  I could barely see him…just pieces of him mostly.  That’s when the prayers start.  “Please, God.  Drop right there.  Fall.  Fall already.”  About 10 seconds later I heard a crash.  Or at least I had hoped it was a crash.  Yes, it’s a crash.  I’m sure it’s him crashing.  Ten seconds later, another crash…same area…this time not as loud.  I figured it was him kicking.  About this time I felt my pocket vibrating again…or still.  I retrieved my phone and texted my daughter, “BBD.”  The time was 5:36pm.  That text took longer to type than it should have with my shaking fingers.  I got no response in three seconds so I figured a phone call was in order.  For as long as I live I’ll never forget the excitement in both of our voices.  I couldn’t believe that I had actually pulled it off on the second day of the season.  Just in case, I figured I’d give him an hour before climbing down to look for him.  I almost made it the full hour.  50 minutes was all I had in me.  As I searched the hit sight for blood, I came up empty.  As I walked the path he took, still no blood.  Not one drop.  This is where worry sets in.  I crept slowly towards the area where I heard the crash and almost immediately saw the big fat white belly…and long tines.  He was D-E-A-D dead.  I called my daughter and told her I found him.  Minutes later we were high-fiving.  Nothing better than hunting with your kids.  Then, as if life wasn’t good enough at that moment in time, I was informed by my wife that our son who is away at school at WIU was stopping by the farm to see us and help drag.  October 2nd, 2013, will be forever remembered by me as one of the best days of my life…thanks to bowhunting and my family.  Now that I’ve lifted the pressure from myself, I turn my full attention to helping my daughter get her buck.

I hope everyone has a great season.  Stay safe and enjoy every minute in the field.  Take a kid out if you can.  If not for them, do it for yourself. 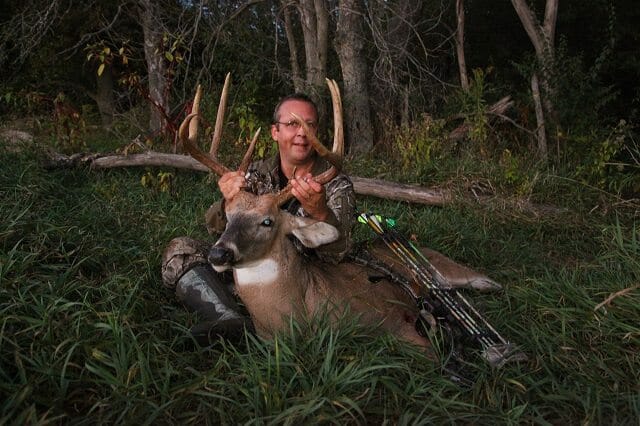 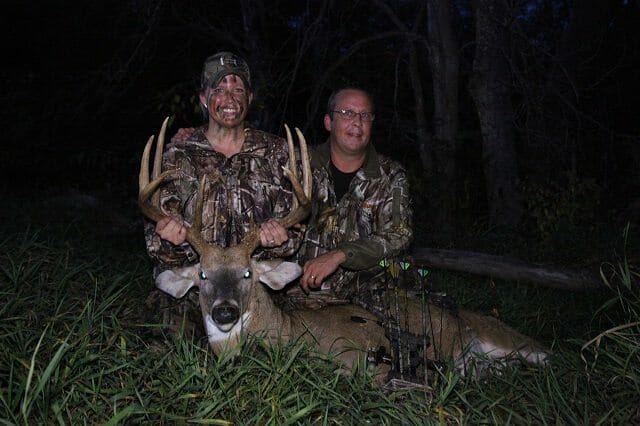 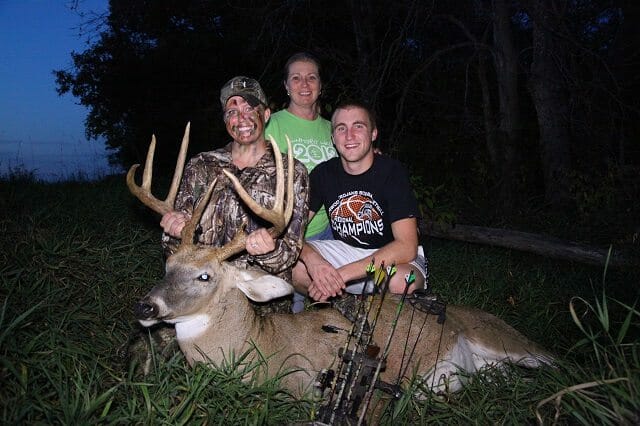