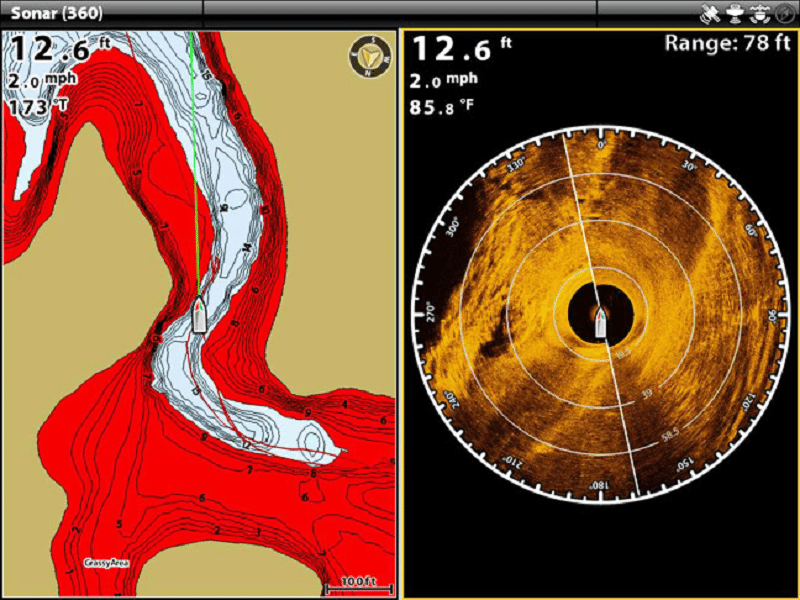 Knoxville, Tennessee-based BASS Elite Pro Ott DeFoe may have more hours on his Humminbird Bow 360 than any other angler on the planet. As such, DeFoe is the perfect person to offer fellow fishermen true “insider” tips on getting the most out of 360 Imaging.

“It’s changed the way I fish tournaments,” says the recent 2013 Bassmaster Northern Open/Douglas Lake winner. “I have an 1199ci HD SI Combo on the bow that’s always set to full-screen 360 Imaging. If my boat is on the water, that 360 screen is up.” 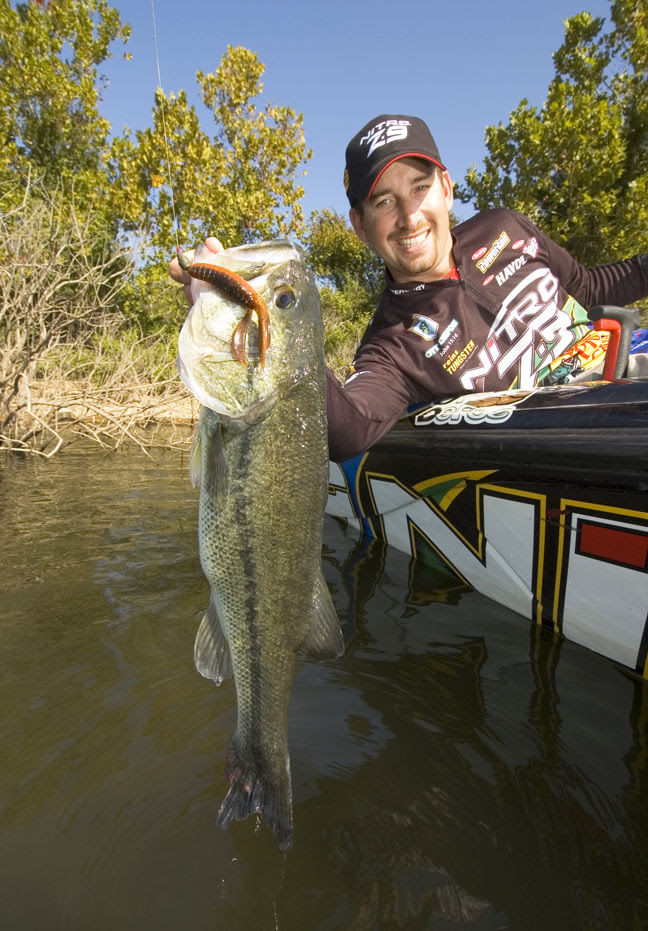 In the case of the recent Bassmaster Northern Open on Douglas Lake, Tennessee, DeFoe says Bow 360 refined what was already a strong game going into the event on his home waters.

“I’ve seen Douglas Lake down 45 feet, so I know every rock already—but the neat thing was being able to pull up to those places and if the wind was blowing or my cast line-up was getting off—all I had to do was look at the 360 screen, which I typically have set to 100 feet in every direction, and I knew exactly where I needed to be.”

He says this newfound level of precise boat control has been critical come tournament time when every second counts and each cast needs to be the right one. “Being able to see what’s underwater in front of the boat has completely changed my offensive game.”

Tip #2: Spot roving fish on structure. Watch for sentinel fish and the target species that may roam with them.

DeFoe cites the Toyota Texas Big Bass Classic, held this past May on Lake Fork, Texas, as another example of Bow 360’s power. 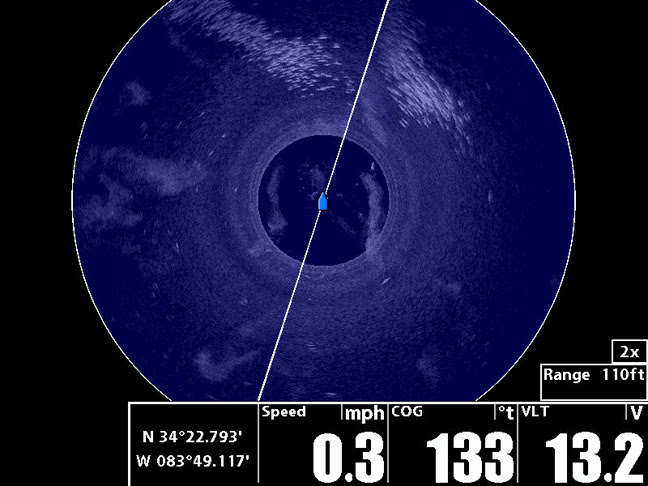 “On Lake Fork, I was lined up side-by-side with another competitor’s boat who didn’t have Humminbird units, let alone 360. We were both throwing worms onto an underwater ridge. Then, on my 360 screen I saw a school of white bass with larger marks below it move in from off the point and over the ridge 65 feet ahead of my boat. So, I grabbed my crankbait rod and first cast, white bass; second cast, 7-pound bass. Had it not been for 360, I probably would’ve just kept throwing a worm. That’s something you can’t do if you’re only looking straight down with sonar.”

“It’s probably the biggest tool yet for locating and catching schooling bass in deeper water. I’ve located bass in some pretty random open water chasing schooling shad. With 360, you can follow and stay on fish in real time. I can tell exactly how many feet and in what direction that bait is and actually anticipate the busting bait and feeding bass. With 360, it’s literally follow the bait, follow the fish.”

Tip #4: Find hidden, shallow-water cover in front of the boat.

“Recently, while pre-fishing the Elite Series event on Lake Dardanelle, Arkansas, I was fishing a flat with a few visible logs in water less than 3 feet deep. I saw a couple pieces of wood but knew there had to be more underwater. I saw something on 360, so I threw over there, caught a 10 pounder, and thought, that was cool. Went back again, then caught a 4 pounder. Turns out it was a big stump submerged underwater.” 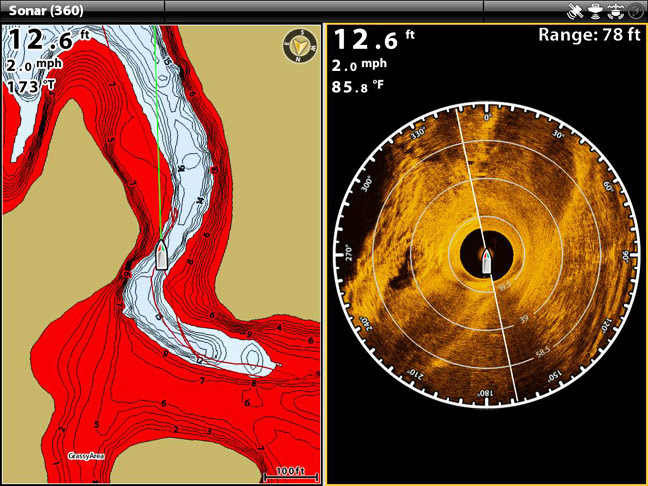 The 360 screen on the right shows a river channel from roughly the 1:00 position to the 7:00 position.  Off to the left is a steep wall with a dark, scoured out hole. The Humminbird LakeMaster map on the left shows the tight contour lines and it’s easy to see why they converge on the deep, dark hole.

“You can dial in the range to 30 or 40 feet and locate target areas like dock posts, pilings, brush, cinder blocks, etc. in muddy waters. This is also a good way to find cover in the spring that bass might spawn next to.”

“When I’m fishing along a bank and moving forward, I’ll narrow and offset the sweep from 360 degrees to just in front of the boat and view that in full screen.” 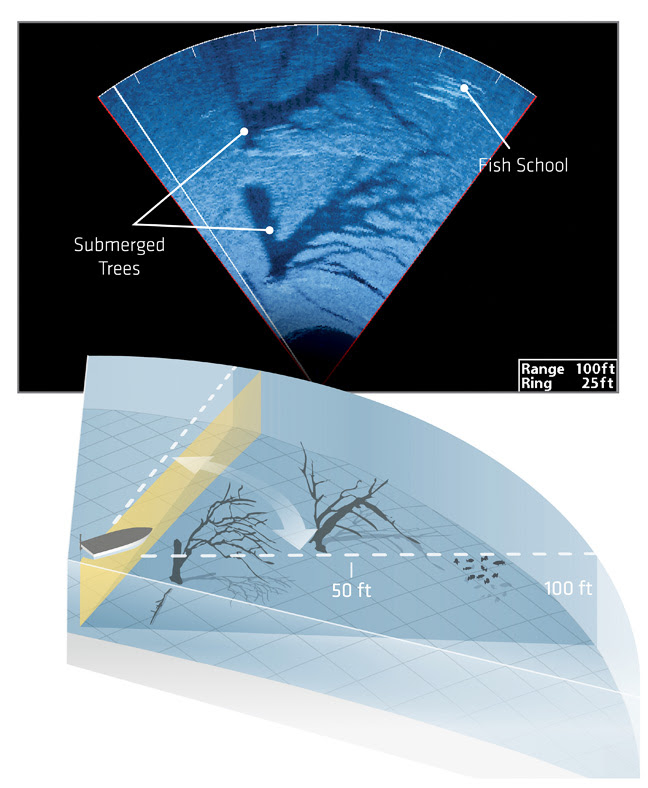 Tip #7: Turn navigation on; watch waypoints appear on your 360 screen.

“A lot of times I’ll turn on navigation mode, so my waypoints show up on the 360 screen. Once you put your boat icon on that waypoint, you’re right there. I feel like it really helps me get the exact cast that I need to get. It’s made all the difference in some tournaments.”

The 360 screen reveals a surrounding river flat and sharp channel drop-off to the right (represented as the darker area).

With his Bow 360 set to a 100-foot range in the Amber color palette, DeFoe keeps the sweep speed at standard, keeping settings changes minimal. “Most of the time the factory default setting is right on. I may occasionally kick up the sensitivity and contrast a notch or two, depending on the lake, but that’s it.“ 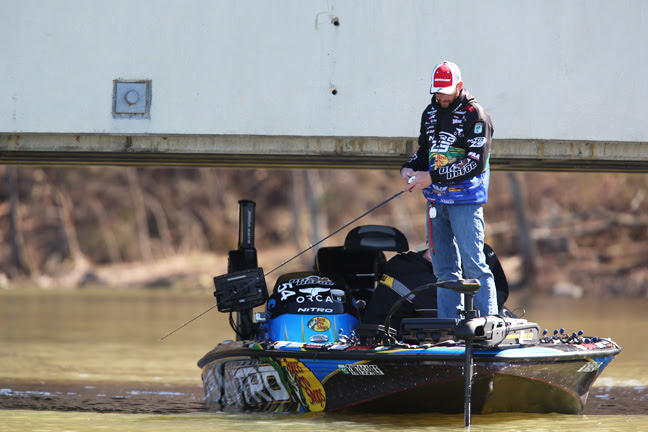