Saturday, May 18th Nick and I fished in the Lowcountry Redfish Cup Edisto Shootout and placed third with two fishing weighing 6.13LBS.

We made our way to the coast in the pre-dawn hours of the Thursday before the tournament. We arrived at the ramp at around 8 AM after a long drive and hit the water. After a few hours fishing, to no avail, structure (docks/trees) that we thought fish may be staging on as the tide was changing, we decided to give up on that tactic and move on to an area we fished before. Now, I will say that fishing structure when the tide is in the process of changing can be a very successful way to catch redfish. But, it can be a long and tedious process to find the right dock or tree that is holding fish.

So we moved on to our next spot which was a long bank with oysters and a defined grass-line. We have found that these are the areas that we can pattern the best and usually will hold fish. Another key that we have found is that there needs to be multiple small points along the bank and scattered sparse grass between and on the points. These areas may not result in tournament fish but, they will usually result in fish. We got to our area of interest and started fishing. We saw a couple of fish cruising that we knew were close to being slot fish. I was throwing a gold spoon and Nick was throwing a Z- Man Fatty-Z on a flutter hook (more detail on this rig to come). We made it about 25 yards down the bank throwing parallel to the grass-line to make as natural a presentation as possible. I was looking up ahead of the boat when a small mud cloud caught my eye close to where I had just cast, and before I could react, I almost had my rod yanked out of my hand!

As I began to fight my fish, Nick said a school spooked out and threw his rig well in front of the school and he quickly hooked up on another fish. He quickly reeled in his catch and measured it to be about 19″ – a mid slot fish. My fish took a little longer to get in and measured 24 1/2″. Between these two fish and the multiple other fish that spooked out when we were reeling the fish in we knew that we had found the right fish (and we only fished 25 yards of a 300 yard bank)! So, we quickly left the area and knew that we would be back the morning of the tournament. We had one more place to check and it was getting late in the afternoon. We have caught tournament fish before at this spot and just wanted to check to make sure the fish were still where we thought they were. We arrived to the spot, another bank similar to the one we just came from, and it took about 5 minutes to spot a school pushing along the bank. Nick and I cast in front of the school, both got hooked up, caught and checked the fish and left in the span of about 10 minutes. We try our absolute hardest to not molest the fish or catch too many out of a school.

That was the end of our practice fishing on Thursday. Long story short, we fished Friday as well and while we found some good flounder, we did not find anything that we thought was worthy of coming back for during the tournament.

On the morning of the tournament, we were the first boat to blast off. We blasted off at about 6:15 AM, and it was off to our first spot. This is the spot that we quickly fished Thursday evening that we knew had good slot fish on it. The tides matched up right and that is where we wanted to start. We start fishing and watching for fish to be pushing along the bank. We saw a few fish pushing but nothing like what we saw Thursday during practice. We were not getting any bites but we decided to stick it out and see what would happen. After fishing for over an hour I finally got a very light bite on a jig head with a pearl and chartreuse Gulp shrimp. Nick netted the fish and it was an 18″ slot fish. Small but, a start. We continued to fish for another hour with no more bites. Just as we were discussing leaving the spot, Nick got another bite and once in the boat we had another 18″ fish. We had a limit, now it was time to start culling. We fished a little longer and decided that the tide was right for us to move to the new spot that we had found on Thursday. We arrived at the spot and began to fish. The water was decently clear and we were looking for cruising fish. After fishing for about 15 minutes, I was reeling my Gulp shrimp in when a nice slot redfish almost came out of the water and swatted at it.

This told Nick and me two things: 1) these fish were actively feeding and 2) We needed to back off, slow down and pick this area apart. So we pulled back from the bank and ate a sandwich, drank a Gatorade, re-tied some baits, got the rods ready that we knew we would need, and started meticulously fishing the bank. We were hitting every area of sparse grass, every indention in the grass and any area that looked remotely like a fish could be on it or cruising by it. I made a long cast with my Gulp shrimp across a sparse grass point and felt the familiar knock of a redfish. I set the hook and knew that this was a good fish! I horsed the fish in a little to Nick’s discontent, but we got it in the boat. It was a little over 22″ a solid fish. So, we culled out one of the smaller 18″ fish and started fishing again knowing that one more fish like that and we would be in good shape for the weigh-in. We continued to fish the bank and caught a couple of fish that were just a bit too long. We were beginning to run out of time when Nick spotted two fish cruising very close to the boat. He was fishing with a Z Man FattyZ on a flutter hook. Here is the rig: 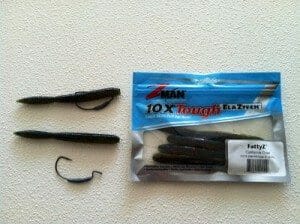 We like this rig setup because it is something different from what the fish see on a regular basis. The Fatty-Z also floats, so with the flutter hook weighted towards the front the tail floats up off the bottom. The color we were using was California Craw; it looks very natural in the water.

The two fish instantly locked on to his rig and within 10 seconds of flipping at the fish, Nick was hooked up with another nice fish that was about 10 feet from the boat. We got the fish in the net and knew it was another good one. It was not quite as big as the fish I caught but it was almost 21″ and we culled our other small fish. We knew that we had a decent bag of fish but, nothing to get too excited over. We continued to fish the area and picked up a couple more fish that were over the slot. We decided to go back to our original spot and try to pick up one more fish. We arrived back at the spot and the wind was blowing into it very hard but, we decided to give it a shot. I was throwing a popping cork with a Gulp shrimp and a gold spoon. Nick was throwing a spinnerbait with a pearl paddle-tail swim-bait. We did not have much time left when Nick had a fish on. We knew that the fish was going to be close to 23″, and unfortunately when we got the fish in the boat it was 24 1/2″.

We headed to the weigh-in with a decent bag of fish and hopes of a top 10. We got to Red’s at Bohicket and weighed in our fish for a final weight of 6 lbs. 13 oz. which put us in 3rd place for the tournament and we won a few hundred dollars 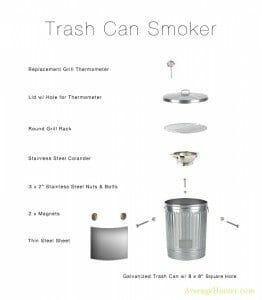