For the longest time, I was a “hatchet” camper.

It always rode nicely on my belt or attached to my backpack. And, aside from how quick it was at chopping up small, dead, tree limbs, it was a tool that made me look like a true outdoorsman. 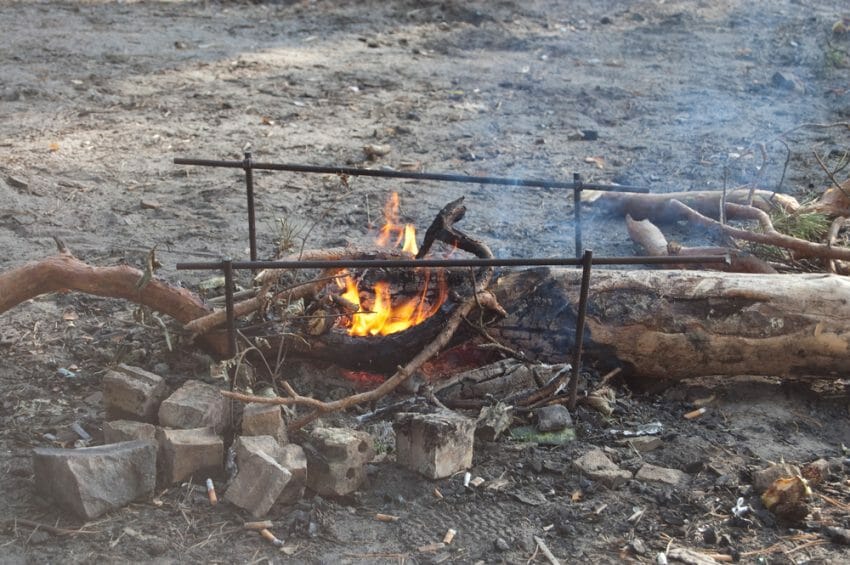 (Am I the only one who camps for the credentials as much as for the enjoyment of the sport?)

Plus, as the night wore on, we could always setup a dead log and take turns throwing the axe at it. So it was an entertaining tool as well.

And, while we are discussing the benefits of camping with an axe, let’s get real honest and admit that a hatchet can dig a small latrine pretty effectively when you need one in a hurry. So there is that benefit, too.

The downside with the axe was that it never did a good job on larger logs. With enough determination, you could get through one, but it worked best with logs that were 4 inches or smaller in diameter.

I camped in places with ample firewood supplies, so those limitations were never a real concern. The hatchet mostly got the job done and remained my primary choice for chopping wood.

You’ve likely seen the pocket chain backpacking saws advertised in those outdoor magazines. I had never seen one in the field until a short 5-mile hike and camp that we were doing. One of the newer guys who was coming along brought his new pocket chainsaw that he had bought.

I didn’t give it much time and mostly went on with my life, collecting wood with my hatchet.

It took him a little bit to really get into the groove with his saw. Where it started to shine was on wood that he could stand on. He’d lace it underneath these larger dead logs, stand on top, and start sawing like there was no tomorrow.

It required a lot of work, but he sawed off 3 or 4 nice pieces of 6-inch wood that added a lot of sustained heat to the fire. What he had to invest in effort, he made up for in not having to collect as much wood to get the same amount of fire. We got a few more logs cut from the other guys taking a turn with his saw.

That said, seeing the amount of sweat and dedication required, it sold me on the fact that I never wanted to be left in a scenario where I had to use a pocket saw. There’s blogs out there that say you might get tired after sawing 15 or so logs. My opinion is that after the first log or two, you are pretty done with the idea of a pocket saw.

That said, he was able to make better use of some of the larger logs that I was skipping over and we had a great campfire.

On the next camp, we were blessed with the presence of a long-time woodsman. He was carrying a folding saw along with him. 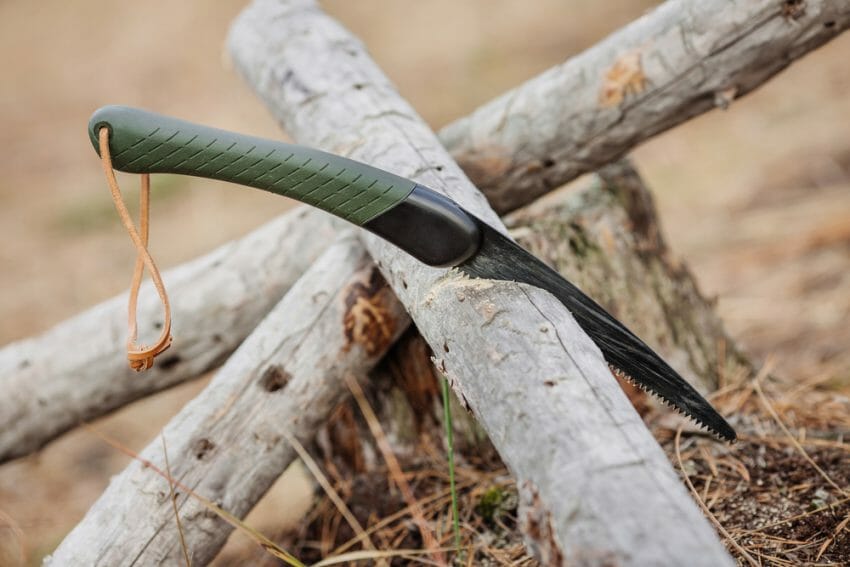 Just as with our pocket chainsaw buddy on the previous trip, this guy started collecting a lot of 6-inch diameter and larger logs. But the difference in the amount of time it took him to cut them up was jaw dropping.

I was still wrestling with my 4 inch twigs and he had hauled, cut and stacked  the camp’s firewood for the night.

It was the first time I was ever at a backpack camp that had a stacked row of firewood.

The folding saw offered the best of all worlds. It was light and portable. However, just like my hatchet, it was fast and easy to use. Sure, it isn’t going to be as easy as cutting wood with a gasoline-powered chainsaw, but it also wasn’t so hard of a workout that you finished camp setup feeling like you needed a recovery shake and a massage.

Since that time, there’s been a few different folding saws that have made their way into the pack. A favorite is a the Axesaw (Made by Zippo, I think, although there may be others). This combination tool offers a fairly large axe. However, it also has a saw blade that you can string in place from the blade of the axe to the handle. This gives you a lot of leverage and lets you cut wood much faster than a folding saw will allow.

The other option that has been handy, has been the 15-inch handsaw. Granted, this is a little larger, and now that I have the Axesaw I never bother with the handsaw.

But on camp trips where there were a lot of guys going and there was a pretty good chance that we’d need to cut a lot of wood, I’d wrap a 15-inch handsaw in a bath towel and slip it in my pack. It could make extremely short work of any log, and was dirt cheap to buy at the local hardware store.

This summer, for climbing into the trees and trimming the branches back from the house, I invested in a cordless reciprocating saw. It’s relatively lightweight and makes impressively short work of the limbs.

Now, this is pointless to mention for a backpacking trip. But for the next horseback or canoe trip, I think I’m going to try bringing it along.

It’s one of those saws that I don’t use enough to justify owning it, so I need to come up with more uses for it. I think it could make cutting the firewood for camp a lot easier.

If I had an RV, I’d definitely leave it in the camper.

There’s a lot of great reciprocating saws out there. If you decide to give it try, I’d just go with a cheap option on a list like this: https://www.tooltally.com/best-reciprocating-saws/

So that’s my take. The hatchet is still such a handy tool. Heck, you can even use it to drive tent stakes. And I’d like to think it’d give me a fighting chance against a black bear. But the folding saw is where it is at for speed and ease of use. As for those pocket chain saws? They are handy in an emergency, but let’s not end up in a scenario where we need to use them, deal?

AverageOutdoorsman.com admin Eat, sleep and breathe the great outdoors.
Get outside and enjoy the Great Outdoors,
Twitter - LinkedIn