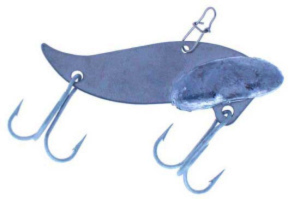 A number of years ago sitting down with an elderly fellow, a dedicated fan of the Silver Buddy blade bait, provided an introduction to a wealth of information on the use of this casting spoon type of blade bait.

There are a number of similar spoons on the market but the old timer swore by the Silver Buddy. He explained that one can gain confidence in the lure by using it.

The versatility of the blade bait is apparent regardless of the time of year.  It is effective on schooled fish and yet works equally well seeking fish that are relating to structure.  A number of different species will attack this unusual looking lure.

If this bait is so perfect, why do not more anglers use it?  Probably because they just have never tried it or are not sure how it fish this contraption from the southern states.

When the water temperature is between 38 and 60 degrees, it seems that fish have a tough time catching heavier lures.  A high percentage of fish are foul-hooked outside the mouth.

Reasoning that you need a lighter slower sinking lure, makers of tackle came up with blade bait made of a zinc alloy that is lead free and still has a hook noise.

Lead tends to deaden noise of the hooks hitting the blade, but zinc produces a lot more sound.  The difference is the same as the difference between beating two sticks together and ringing a bell.  The lure also is lighter and flutters more on a slow fall.

Blade baits in general are a simple blade to work.  They are presented in three ways dabbled or vertical jigged, jigged beneath a slip bobber, or cast and retrieved.  The beauty of this lure is its versatility.  You can retrieve it quickly, allowing for the covering of more area.  That increases the odds of attracting a bass’s attention.  It also has a bait fish profile. Coupled with a lot of flash and a tight wiggle, it gives the appearance of a baitfish darting to escape.

Buzzed across the surface with a steady retrieve interrupted with a brief fall make true blades are deadly.  Casting and retrieving allows the angler to scour a weed line or the edge of structure.

By finessing the blade bait, the angler can lower the bait into the school or near structure, hop it up and follow it down with the rod tip.  Fish marked with sonar, are sitting ducks once you position the boat over them with a trolling motor.  Without a trolling motor, the angler can anchor upwind of the school and allow the boat to drift at the end of a long anchor rope until it is over the fish.

In dabbling you drop the blade into shallow sunken timber using a long jig pole or fly rod.  It is similar to jigging but the angler gives the lure considerably more action.  A flick of the wrist will give a lure a hopping action.

The slip bobber approach is tying single small blade bait beneath a slip bobber that adjusted to keep the lure just above weeds.  The angler casts the lure, lets the blade settle.  He then begins to jig it bringing the line through the bobber.  The lure then begins to vibrate.  This procedure works well around timber with 8-pound line.  You may use lighter line in open water depending upon the species sought.

Blade baits are particularly popular with anglers seeking white and hybrid‑white bass in some of the larger impoundments. Probe large schools of fish with the bait as the fish feed on shad during the fall.  Cast heavier lures beyond schooling fish and bring it back through them.

Because the lure does not land on top of the fish it will not spook them.  Begin with a steady retrieve through the schooling fish and then let it fall.  Usually the bigger fish are below the shad, and the falling bait gets down to their level.

Blade baits all have their place in the tackle box.  Each has its own vibration, shape and sound.  With a little practice and experimentation, one can find the one that is right for the situation at hand.  Why not give them a chance.

To see the original article, go to https://dongasaway.wordpress.com/2017/05/30/fishing-blade-baits/