As with many of the recipes on CampfireKitchen, for this Paella I’ve adapted the traditional version of the famous Spanish dish to make it easier, and a bit cheaper, to prepare in the outdoors. Also, I’ve a bit of a confession to make, I would usually make this with chicken but this time I used the equivalent amount of turkey breast because it was reducued in the supermarket. A Scout is thrifty. This Paella doesn’t call for saffron but there are some other herbs and spices in it so it might be worth making the CampfireKitchen spice rack. Instructions can be found here. This recipe should serve 4-6 people if you throw in a few sides.

Went you’ve got your BBQ or campfire down to hot embers, give the bottom of your pan a good rub of washing up liquid. Heat the olive oil on the pan and fry off chicken. Once its good and cooked remove it from the pan and set aside. Don’t remove too much of the oil. 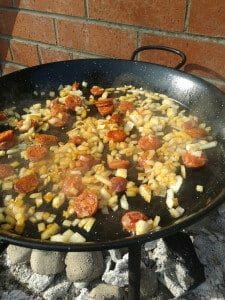 For the next stage of your campfire paella add the chopped up chorizo and onions and cook it until the chorizo is sizzling away, stir the mix a couple of times. The next stage is to add your chopped up peppers and give them a good mix about in all the flavoured chorizo oil. Once the peppers have softened up a bit, take the whole pan off the heat. 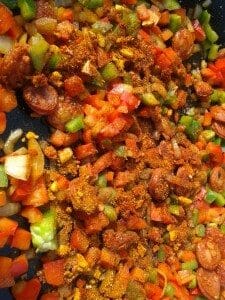 Our next step is the garlic and dry spices. These have a tendency to burn easily on a big pan like this if you don’t keep them moving, removing the pan from the heat helps minimise this risk. So go in with your chopped garlic, the paprika, turmeric and chilli powder. Stir that around until you start to be able to smell the garlic. The residual heat in the pan and oil will be enough to cook it. It’ll take about a minute.

Add the rice to pan now and stir it through the spiced chorizo, onion and pepper oil until it’s all coated. Coating the rice in the oil like this helps it to stop sticking together. Get the pan back on the heat and add about a litre of your chicken stock and the two chopped up tomatoes. Season with a pinch of salt and pepper and stir it all together. 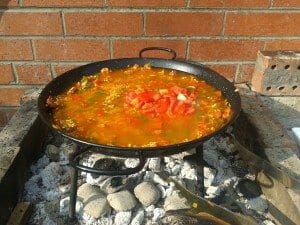 It’ll need to cook like this for around 25-30 minutes. Keep an eye on the moisture level, if it’s ever at risk of drying up and burning top it up with a little more stock. In the very last minute or two add your chicken from before and stir it through. You want to serve this when there is still a bit of a bite in the rice. It will keep cooking for a minute or two after you take it off the heat so if you keep on the fire until the rice is cooked through it will be mush by the time you’ve got it to the table. 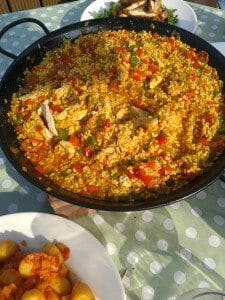 Let people serve themselves paella from the pan but be careful about settle the hot pan on tables or table clothes etc. It might be worth putting a brick or two on the table to set the paella on to protect the surface underneath.

Serve with a nice salad and some crusty bread. As I said before, it may not be a traditional Spanish paella but it tastes good and it’ll definitely impress. Enjoy.

To see the original article, go to http://campfirekitchen.co.uk/2013/07/chicken-and-chorizo-paella/