Continuation of: Answering The Call, Part 2

But I’m good at that game, and in the state I was in, knew better than to try a call. Instead, I poked around for a thin stick of driftwood, and snapped it sharply in the air. The report echoed back from the far shore, almost overlapped by a coarse “woooff” and crush of branches. Within seconds, he was stepping in the shallow water. I could only imagine his impressive rack, striding proudly, wading straight out towards me. The splashes deepened with the water, as did the tension, for it seemed he was soon to be swimming across and I had yet to see him. There was plenty of hunting light remaining and though I was blind to that direction, he would have a better view. My canoe floated ten critical yards offshore, directly in line. A move was required. The moose had stopped, knee deep, I suppose, and was staring me down. I figured the next time he moved, I would too, along the shore, north, closer to Al. If he swam the lake I’d try to pull him to where one of us may get a shot.

The wait seemed forever, but at last, he grunted and stepped out once again and, on his third splash, I trotted four quick steps. He stopped and I sloshed four more, pulling up beside an overhanging alder. He was in motion again, but seemed to have more spring in his step and I realized that he had turned and now paralleled me as I looked north. Either he had spooked or decided to circle the lake. But his steps were plodding and steady and he called often, and, deep inside, I heaved a sigh of relief. He was coming around and I was pretty sure I could drag him past my partner. Time was the only factor. I had to keep him moving.

I tugged the brim of my hat down to shield against the bright sky and stared hard at the sounds coming from the far shore. A hulking shape loomed out of the darkness, floating like a black ghost against the treeline. He sloshed along, ten yards offshore, becoming more defined as the background bush dropped to the horizon. Covered by his noise, I hop-scotched from boulder to boulder, making good time while staying close to shore, but soon ran out of rocks and had to stop. He plodded on until a brushy point jutted out, blocked his way. Sensing him roll his head around to listen, I swished the water with one boot while gulping my best calf call. At that, he “woofed” heavily and plowed onto the point, disappearing, but emerged shortly, on the waterfront, and stopped where the thin strip of hay began, highlighting his silhouette. The head was tilted back, long nose high, and, when he lowered it, a small tight rack was noticeable. I rustled some alders with my free hand and mewed as a calf until he moved once more.

And so it went, alternating steps, call and answer, up opposing shorelines into the bay. Each call became easier as my voice loosened and confidence rose. But his treks grew shorter, stops more frequent. These stalls were painfully quiet and testing. A thousand crickets seemed to ring in my ears. Dare a call? Swirl a foot or shake a tree? One errant sound and he could be off. Pounding pulse and patience. Often, pure silence coaxed him on, and a bark, loud and gruff, would explode, in time with his first step, and echo across the bay.

Moving and halting with the moose, for the better part of an hour, I had worked myself into a fine position, beneath a clump of alder, 60 yards from Pyjama Boy. I could vaguely see his

pale figure, crouching in the stand, against the quickly darkening sky. The young bull, contrasted, bold and black against the hay, was broadside less than 100 yards beyond, steam spouting from his upturned nostrils as his head nodded slowly in a small circle, searching for a scent. His ears, standing at attention, focused on my hideout. The silence was deafening. One last delicate barrier lay twenty yards ahead of him. The outlet creek, 10 yards wide, the outer limit of Al’s shooting range. If only I could move him across. And soon.

Our silent staredown dragged painfully . He stood motionless. Frozen, stone still. And I gave in.

Grabbing a handful of brush, I gave it a gentle shake, then, cracked the heaviest branch.

“WHOOOF” The entire body of the bull convulsed, as he let out a thunderous grunt and trotted the short distance to the creek. The deep roar had scarcely bounced from the hills and back to my ears when he jerked to a stop at the bank.

I rattled the bush again. Instantly, he roared and shook and, to my dismay, turned and ran down stream, out of sight. I gave a desperate call, loud and pleading, and heard his splashing hooves, going away. My heart dropped.

Then, pounding through the grass, there he was, on our side, barreling right down the trail towards me. I’m not sure why, if he saw me or smelled pyjamas, but he halted, dead in his tracks, straight under Al. I saw Al draw, heard a whir and a whack, and that bull spun on a dime and plunged, headlong, into the deep creek and lumbered up the other side to shake off, exactly where he had stood a few short seconds earlier. With a disgusted look back, he trotted away through the hay. Twigs rustled and snapped as he hit the bush. Then all was silent. Except for the heartbeats.

Again, I waved my arms frantically at Al, hoping for some kind of response, but I guess he’s not much on sign language. So I strained my ears for a short while then, carefully, slipped along the shore and waited for him to come down the bare cedar. He had stayed up to listen and now was having a hard time descending. He was wide-eyed, quivering noticeably, and gasping as he tried to whisper.

“Unreal” was all he could manage.

“Better than sex” he babbled, “never been so excited!”

“Oh yeah, stuck him good! Up here!” And he reached around for the part of his back that he couldn’t reach. “ Just the feathers left sticking’ out! Buried it. Was gonna take another shot when he stopped there, but couldn’t get it off! Last I heard him, he crashed thru that feed over there and that was it!” Al pointed down the creek to where it bent around a thick tangle of red willow. “I’m pretty sure he’s dead meat! Man, that was something else!

I pumped his big mitt and slapped up at his shoulder. “Exxxcellent!”

Al rambled on. “I thought we’d lost him when he took off that last time. He musta’ known it was shallow over there. Drew on him as he ran in, the railing was in the way. I had to get up on my toes to shoot. Couldn’t really aim, I just shot. Man, oh man. Un******real.”

It was last light and we briefly searched for blood at the scene of the crime. None could be found and I left Allen flicking his bic and slogged back to retrieve the canoe. From the sparkle in his eye and smile on his face, I was confident there was a moose down, somewhere, across that creek. By the time I stroked in, Al was at the water, on the trail, with no blood yet. Thick

gouges and craters scarred the other bank where the bull had hauled up and out. Al jumped in and I swung him across.

No blood. It was hard to pick out the proper set of tracks, given the number at hand, but the thin crystal frost, quickly forming on the grass, had been disturbed in his wake and we found a couple small dots of red a short distance from shore. On finding a second patch of blood, I placed my hat over it and we retreated to the canoe and paddled hard for home. Man, I was thirsty!

It was a moonless, starlit night. Marvelous.

Andre waited by a small fire at camp. He had heard it all! The grunts and bellows, snapping and splashing, and was completely amazed. He was nearly as excited as the two of us. We hurriedly told him the story, so far, while gulping down an ice cold beer and rounding up lights, rope and axe. And we all piled into the boat and motored back up the lake to pick up the trail. It had been forty minutes since the shot.

We must have been quite a sight that night, in the hay. Three of us, side by side, puffing steam. Ice crystals sparkled all around. Al sported a miner’s type cap lamp and gripped two hands on my carried my cocked crossbow, arrow at the ready. I walked slightly ahead, Coleman lamp held high, axe at the ready. Andre waved a Maglight, sweeping for eyes, far ahead, side to side.

The blood trail was scarce, but steady. One or two drops every five yards. The swath through the frosted grass gave us a good look ahead and the trail was never lost. It led into the patch of willow and we found our prize laying just on the other side. A three year old bull with a chunky little rack. Allen’s arrow had worked its way out the bottom of the belly. The feathers no longer adorned his back. His final run had covered less than 100 yards.

We raised a little cheer, did a little dance, and made quick work of gutting him, leaving the tip of his heart on a nearby branch. (a tradition passed from my late father-in-law) With our moose propped open under a cloud of rising steam, we headed back, starry eyed, into that marvelous night.

The next afternoon brought 3 days of warm rain, but our spirits were never dampened. George popped in Friday, as scheduled, and flew our quartered moose out, to hang in the cooler at the lodge. The bows were stored away, and the camp frame was completed. One quiet morning, a young bull chased a cow and calf along the far shore. Wanting nothing to do with him, she clipped along thirty yards ahead, each splashing hoof sending up a little rainbow. We found some time to catch a few fish and fix up tree stands and shooting lanes. The old bare cedar was deemed worthy and left untouched, ready for the next brave hunter 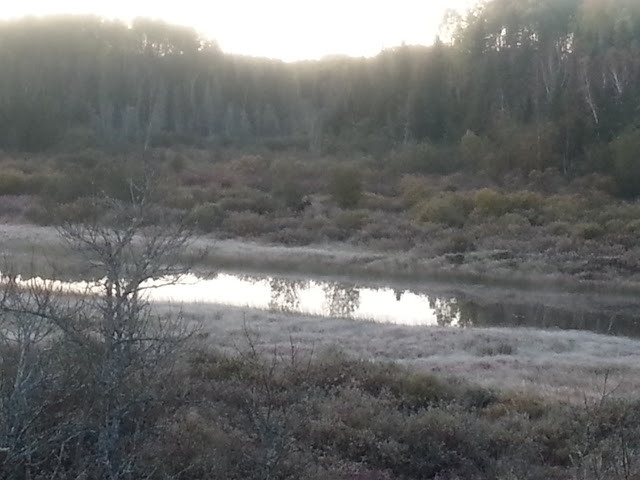