While reflecting back on the previous season and the highlights, I keep thinking about my son and daughter spending more time out there with me.  Although I am still working on my daughter and waiting for her to finally live and breath the outdoors, it didn’t take long at all for son.

I have discussed this a few times in previous posts so I won’t go into all the details but this was my son’s first time behind the gun and actually first time in a tree.  It was the final day of the 2012 youth deer season which was the first day we could get out.  We camped out the night before at our farm in Illinois with their Grandfather, my dad.  Both kids were pumped to go and they drew straws to see who would sit with who that morning.  My daughter got my dad and the boy got me.

The morning was rough for all of us.  I don’t know if many of you have had to deal with trying to get yourself, a 7 year old and a 10 year old ready for a hunt at a camp site before.  All I can say is I started early as was still late.  We finally get out to the tree and I can feel my son shake as the sun rises and I know it’s not from the cold.  We was super excited to finally get to hunt.  Well a half hour after the sun had risen, Aiden had the Encore pointing at a buck just 10 yards from the tree.  It seemed like 10 minutes later as he was trying to make the perfect shot, the smoke was rollin and a boom is echoing threw the valley.  I watched the deer crash 40 yards away as Aiden is mad because it ran off.  He was expecting it to drop and thought he missed.  I told him he made a good shot but he didn’t believe me.  I feel bad for him as he kinda lost some of the after shot shakes we get, but I had enough for him.

I was so proud as you can imagine.  Not the fact that shot a deer, but the fact of how he did it.  He thought about everything I taught him.  While he was lining up his shot, I could see him slowly take deep breaths, he was make sure he was holding the gun correctly and he was making sure he made a clean shot.  Luckily the deer stood there long enough to let him do that.

I didn’t get a chance to video the whole hunt.  But I got the find, and that was the best part.
My favorite part is when he asks about the shot.  Oh ya, he got the pumper. 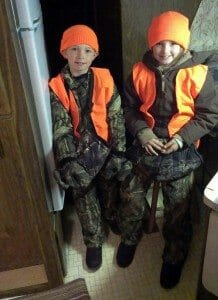 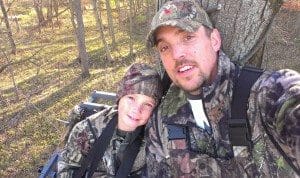