You are here: Home / Latest Articles / Recycle Your Defensive Ammo?

When Should You Recycle Your Defensive Ammo? 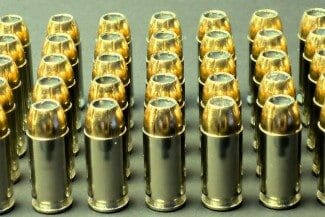 On numerous occasions, students have questioned when they should recycle defensive handgun ammunition. Unfortunately, there is no one concrete answer. The answer depends on a number of factors:

When ammunition is not damaged by manual cycling through the gun and not able to be reloaded with a press like at gunloading.com, there generally is no problem and the gun functions just fine. However, you need to think about how many times per week or month you are cycling a loaded round through your gun in loading or unloading. If you cycle the top bullet from the magazine into the chamber each time, you are getting plenty of hits on the bullet nose, extractor groove, and case rim with basically steel on brass. What do you think will give first? If you guessed the brass or the copper, you are correct.

Every time you cycle a round into the chamber, the nose of the bullet hits the feed ramp causing a slight denting of the hollow-point bullet mouth. The size of the dent depends on the weapon feed ramp design and the shape of the hollow-point bullet nose. If the bullet nose hits against the feed ramp enough times, with multiple re-chambering of the same round, you could get enough of a dent to cause a miss-feed and/or a jam, rendering the weapon temporarily out of service, if only for a critical moment.

Every time you cycle a round from the magazine into the chamber, you are making a small gouge or dent in the extractor groove and/ or case rim. With time, continued recycling can cause a weapon malfunction, depending on the design of the weapon. 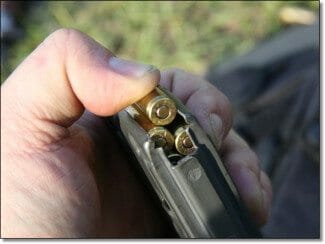 Some weapons have sharper extractor tips than others. High extractor tension coupled with a sharp extractor tip can increase the case damage. In addition, the shape of the ejector and the force of the manual ejection of the loaded round can damage a case rim. In addition, defensive ammo is out in the weather — rain, sleet, snow, with extremes of temperature and humidity. We have seen, many times, bullets in the magazine that have turned green from corrosion. We have even seen bullets in the chamber so corroded, that they had to be removed from the bore with a wooden stick.

Some students over-lubricate their guns, and this lubricant eventually gets on the ammunition. Over time, certain lubricants can get into the casing, contaminating the powder, primer, or both, causing the round to not fire or resulting in a squib.

After a careful review of the above information, consider whether or not you load and unload the same round time and time again. If so, you can lessen the wear by putting the chambered round in the bottom of the magazine.

You should examine the bullet tips, and if they look beat up, segregate the ammunition for practice. You should also consider the weather conditions in your area. If you are in an area of high heat and humidity coupled with salty conditions (near the ocean), inspect your carry ammunition carefully for signs of corrosion or other damage.

Remember, the rotated defensive ammo can be used for practice when either a miss-feed or miss-fire presents no safety issue for the student. Additional practice to keep skills sharp is inexpensive insurance to protect your safety.

After considering the information presented in this article, you may want to rotate your defensive ammo more frequently. You may find that doing so is cheap insurance and adds to increased student safety.

To see the original article, go to http://www.theshootingchannel.com/when-should-you-recycle-your-defensive-ammo/