You are here: Home / Latest Articles / Hunting / Shed Season Coming To An End
Article Written By: Andy Meador
As I sit here listening to the spring rains pounding away at the roof I can’t help but feel the end is near.  The birds of summer are back, the trees are budding, the ground is now sprouting a fresh layer of green, and that all too familiar sight of freshly shed hair is in every deer bed I come across.  As reluctant as I am, it’s time to close the book on shed season once again.  I don’t think they have enough tire patch kits at Walmart to salvage my Alpha burlys so we’ll close the book on them as well!  It’s been a tough year with the EHD hitting us hard here in central Illinois, but still every time out was filled with high hopes and anticipation of maybe finding a jaw dropper   I had located a few good bucks through several hours of driving and glassing as well as a couple phone calls from a buddy when he spotted one.  This would prove to be a waste of my time!  I think all I found were boot tracks when I went to one of the “hotspots”.  Ahh!  Gotta love public ground. 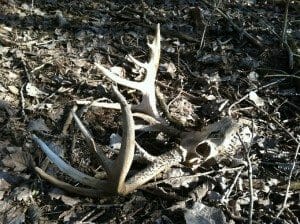 Well, the jaw dropper was eventually found, but not how I had hoped to find them!  With traces of velvet still attached as well as the rest of his skull I found him laying near a pile of bones in a creek bottom half buried in cottonwood leaves all bleached out from the sun.  We hadn’t seen him since mid August, but just figured he had gone nocturnal.  It’s sad to see such a majestic animal rotted away in a pile of bones when you’re so used to seeing him as bull of the woods on his turf!   I found 6 dead deer that day, and 73 total since I started walking in mid January.  I find several dead deer every year but never anywhere close to this.
So now let’s get down to the bone collecting!  It wasn’t my best year but I did manage to pick up some cool sheds.  Nothing huge, no drop tines, no double main beams, not even one side off a 150 class deer, but still it was a good year.  I found some great antlers off of 2 and 3 year old bucks that give me good hope for next year!  Found a backwards upside down shed that is awesome!  Hope he keeps it! Ended up with 10 matched sets and 44 antlers total, but probably wouldn’t have found that many sets if I would have had other places to go.  I just had to slow it down and make do with what I had. EHD has been hard for all of us here in central Illinois but I learned alot this year and I think because it was so tough and I had to work much harder I had no choice but to stay put and learn.   It did turn out to be one of my best years just based on experience and knowledge gained.
All in all it was a good year to be in the woods with family and friends.  I had the pleasure of having a few tagalongs this year in the search for bone.  My daughter loves 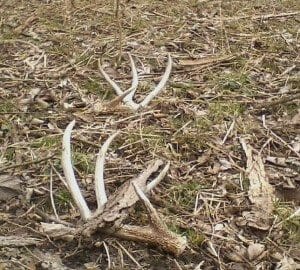 to be in the woods with dad, I don’t think she even cares about finding an antler lol!  She walks behind me most of the time and has seemed to take a liking to raccoon skulls and box turtle shells instead of antlers.  I guess that’s better than video games and a cell phone though.  My other shadow was my buddy’s son Cody.  Ten minutes out of the truck I pick up a set off a small 8 pointer right between the two of us.  After seeing the look on his face I felt about an inch high!  I could just imagine what he was thinking. Shed hog! Shed bully!  Hey that’s not fair!  As luck would have it though, the boy found his very first shed on his own right between me and his dad!  A nice 5 point side off of a 130 class buck.  He jumped up in the air and said “I found a huge one!”  I think he’s hooked for life now, or at least til he discovers girls.  I don’t think I can remember my very first shed, but I remember who I was with and how much I learned from that guy, and what an impression he made on me as a young hunter.  Guys and Gals, take a kid hunting or fishing.  You may just change their life.