You are here: Home / Downloads / The Gray Wolf Sounds and Downloads

Gray Wolf Sounds, Lone Wolf and Wolf Hunting Sounds and mp3 Downloads for your hunting e-call, photography or normal nature viewing.  You can also download any of these on your phone as ringtones. 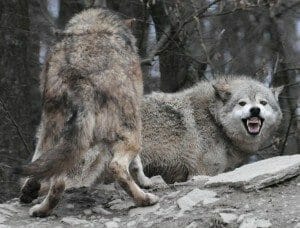 Grey wolves are highly social animals who depend on pack behavior for hunting, protection, and interpersonal relationships. Packs generally consist of 4-8 animals. The size of the pack is determined by the availability of resources and the size of their territory. Within a pack is a dominant male/female who is the breeding pair, and also control when and where the pack will hunt. The subordinate animals are generally the offspring of the dominant or alpha pair.

When a gray wolf reaches sexual maturity between 1-2 years, they disperse from the pack. In other words, they leave the pack and travel 50-500 miles to find a pack of their own. This prevents inbreeding and maintains healthy genetic diversity. Wolves may also be driven out of the pack if they become too old to defend themselves from younger competitors. When a wolf leaves the pack, they become a lone wolf for a period of time. It could be until they find a pack to integrate with, or until they die from old age, or starvation.

The most commonly recognized gray wolf vocalization is the howl. All members of the pack howl from time to time to indicate position, demonstrate territorial dominance or enrich their social bond. The alpha male’s howl is generally lower in pitch than the other members of the pack.
Wolves have three primary means of communication: Physical Behaviors such as posturing, facial expression, and tail position. Scent Marking Vocal Communication- wolf vocalizations are some of the most imitated animals sounds in the human world.

Although it is a myth that wolves “howl at the moon,” they do throw their heads back and point their muzzles toward the sky. This allows the sound to travel farther. The howl of a wolf can travel up to six miles through dense forest, and over thirty miles in open desert or tundra.

Gray wolves are crepuscular animals, meaning they are most active at dawn and dusk. They may also be more active on nights where a full-moon illuminates their prey, making it easier to hunt.

There are several types of howls, wolves use to communicate different things:

The Lonesome Howl: The one most often imitated by people. The long plaintive wail of a social creature, cast off from his/her pack is a sad sound indeed. Generally, a lone wolf will initiate a howl to attempt to determine the whereabouts of other wolves, and assess their strength. It’s a dangerous proposition since the response could be, “we’re here, we’re strong, and we’re coming after you.” But sometimes a lone wolf will take the risk to assess a territory he/she is entering.

The Confrontational Howl: An exchange between two rival packs in the same proximity. This allows them to establish each other’s location and territorial boundaries so they can avoid crossing paths. This can also work against a pack. If their confrontational call or answering exchange demonstrates weakness, it might be seen as an opportunity for the rival, not a warning.

The Chorus Howl: Performed by a pack to announce its presence in an area, but also to confuse its enemies. The chorus howl is led by the alpha who delivers a deep, sustained howl, but the other members of the pack add short, disjointed howls at different pitch and frequency. This confuses competitors about the number of individuals in a pack, since one wolf may make varying sounds at different pitches during the chorus. However, the pack itself, can easily identify the calls of each of its members and determine their relative location and coordinate with them accordingly.

In addition to howls, wolves may whine, or growl, and occasionally bark as other means of verbal communication.

The whine is typically produced by the alpha female while in the den to show affection to her offspring.

The growl is a show of aggression, usually produced by the alpha male to warn his subordinates that they should stay in their place within the hierarchy.

The bark is most often used by subordinate males or females to get attention, in a non-threatening way from the alpha. Sort of like saying, “hey look at me…”