You are here: Home / Downloads / Learn What Lion Sounds Mean and Sound Like

Learn what Lion Sounds they use to warn off intruders or just to talk with others in their pride. 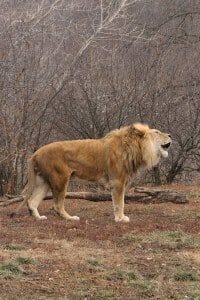 To communicate with each other, lions will use different calls. These calls are what most people refer to as lion sounds. Each of these sounds has a different meaning.

Most, if not all, of us, know the most common of the lion sounds is the roar. It can be described as one of the loudest calls in the animal kingdom. In fact, studies have shown that it can be heard up to about 8 kilometers away. The males’ roar is louder than the females’ roar, although at times this will be determined by age. Roars can be mostly heard just before sunset and sunrise when they are most active.

Roars can be used for several reasons including:

This sound can also be used to show emotion. For intimacy, the roar is deeper and less loud. It is used mainly during the mating season to signify interest in a lioness. Another emotion that is depicted with a roar is a pain. It may be loud or soft depending on the amount of pain the lion is undergoing. To be able to fully understand the types of lion sounds such as roars, one will have to study them closely.

Other lion sounds are made while they are happy. For example, when they are playing together, you may hear silly noises such as puffs and hums. These are mainly used to signify happiness. At the same time, you may hear a soft sound made by a lioness when she is looking for her cubs or is calling out to them. The cubs, in turn, will hear this sound and call back. Such lion sounds are a mode of communication that he lioness uses to find her cubs, and the cubs use to direct their mother. Some of the common sounds and their uses are: