You are here: Home / Downloads / Grizzly Bear Sounds And Why They Use Them & Downloads

Grizzly Bear Sounds for your electronic mp3 caller.  Use for learning bear sounds, hunting for bear or scaring off the neighbor kids. 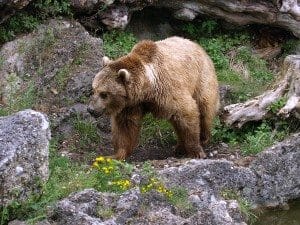 The grizzly bear refers to all subspecies of the brown bear living in North-America. These large animals are apex predators in their habitats thanks to their massive size and strength. The male grizzly bear is larger than females. On average males weight anywhere between 200 and 400 kg, but exceptionally large males can reach almost 700 kg and stand up to 3 meters tall on their back feet. Grizzlies have big and powerful claws, and the strength of their bite is such that it could crush a bowling ball. Although they belong to the Carnivora order, the diet of these animals is largely omnivorous. They are voracious eaters, and their well-varied menu includes fruits, insects, honey, nuts, fresh grass, roots, larvae, all sorts of fish and mammals, birds, etc. They are even known to prey on the American black bear which is the continent’s smallest species of bear

Grizzlies are generally depicted in popular culture as being impulsively aggressive towards humans, but the reality is that these animals generally avoid contact with us preferring to carry on their peaceful lives. Females are known to be highly protective of their offspring and may engage in aggressive behavior if danger is perceived. But grizzly bear always forewarns others about their intentions. They do this through a combination of body language, odor, and sound.

Grizzly bear employs a variety of sounds to communicate. The meaning of bear sounds is very context specific. For instance, a female can communicate with her cubs through grunts, growls, moans or huffs, but these sounds can mean something very different in other situations. Grizzly bear sounds can be non-voiced like snorts, huffs, grunts or teeth clacking or they can be actual vocalizations. Non-voice sounds are employed far more often than vocalizations.

Non-voiced sounds are varied, but have overlapping meanings and purposes:

Grunt – A grunt is may be used as a signal of friendliness or command order from a female to her cubs.
Teeth clacking – When a grizzly bear feels threatened by an unwelcome presence (usually another grizzly bear or a human) it will clack its teeth to signal “you’re scaring me, wander off!”
Huffing – A grizzly may huff when agitated, fearful or aggressive. Huffing is also used as an expression of relief after a bear manages to escape from a scary situation – “Whew, that was scary.”
Popping jaws – This is also done when a grizzly engages in fearful, aggressive or agitated behavior. A female may also alert its cubs through a popping sound.
Snorting – Used by agitated, fearful or aggressive grizzlies.
Blowing air through nostrils – Same as above.

Screams – Used by cubs in distress.
Hums – Cubs also hum when content with the nursing of their mother.
Bawling – This is done by an adult in pain.
Moaning – Adult in fear.
Bellowing – Grizzlies rarely engage in bellowing. It is an obvious sign of aggression, and it’s usually done by males competing for females in the mating season. A female may also roar to defend her cubs from perceived threats.