I think when I first started eating venison and other wild game, stir fries were about all I cooked. Even today that is still a very popular do-it-yourselfer for most outdoorsmen. However, way to frequently stir fries tend to be dry, gamey, overcooked awfulness discretely hidden by so much soy sauce it might as well be soup. This recipe breaks the entire plate down so each individual part of the stir fry is cooked separately so all of the individual flavors are found in every bite. My wife has been sick in bed the last couple days but even she crept out for a small bite. 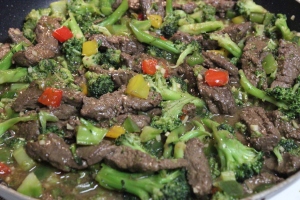 The meal itself is pretty simple. Start by pulling apart a couple broccoli heads so you get a bunch of little florets. I never used the word floretbefore. I will do my best to never do it again. Once you have about pound or so worth of broccoli pieces, place them in a bowl and set them aside. Next, slice your venison into long bite size strips. It helps if the venison is still a little frozen. Place the venison in a bowl and soak it in soy sauce for about a ten minute marinade.

No stir fry is complete without a good sauce. Don’t just use soy sauce, try making this one. Combine in a bowl 5 tablespoons oyster sauce, a couple table spoons of chicken broth, 1 tablespoon white wine, 2 tablespoons brown sugar, 1 teaspoon sesame oil, and 1 teaspoon flour. Use a whisk and mix it all together. Then, just like the broccoli, set it aside for later.

Alright, we got broccoli ready. We got some sauce. Now we need a secrete ingredient that is going to make it all taste like it should. Combine about 2 tablespoons of minced garlic and 1  teaspoon vegetable oil in a small bowl. Again, just set it aside for latter.

Now it’s time to cook some meat. Heat up about two tablespoons of oil in a pan until the oil is smoking. The pan needs to be hot before you add in the meat. Remove the meat from the soy sauce and drain any extra sauce off. The soy was just a marinade and not part of the process. Once the oil is smoking, quickly add about half of the venison to the pan. Try not to flip it for about 30 seconds. Once they flip, there should be some nice browning going on. Cook the other side for a few more seconds then remove the meat from the pan and place it in a separate bowl for later. Cook the rest of the venison the same way.

Lots of steps in this one right? Well, it’s worth it. Now that all the venison is done, its time for the broccoli. In the same pan, remove as much of the venison/soy mixture left in the pan and reheat another two tablespoons vegetable oil. Allow the oil to start smoking again and place the broccoli in the pan for about a minute on one side to allow some browning. Toss in about a half cup of water and steam the broccoli under a lid for about 5 minutes. Once the broccoli is done. Again…set it aside for later in a separate bowl.

We are almost done. This is about the point my sick wife crept out of our bedroom like the crypt Keeper asking when dinner was going to be ready. Now, dice your peppers into very small chunks. Add them to the empty pan and brown them with oil for just a few minutes.

Stir the peppers to the outside of the pan and add the garlic to the middle and allow it to cook just until it starts to brown and really begin to smell. Stir the peppers and garlic together and combine the broccoli, venison, and sauce. Stir it all together over heat until the sauce thickens and you are in business. Enjoy!

Brad Smith has been an avid outdoorsman all of his life. From chasing muskies in Wisconsin to fly fishing for smallies on tiny streams in Indiana, Brad has done it all. During the winters, he spends every possible moment in a tree stand waiting for that buck of a lifetime. Come springtime, he is normally backed up against a tree waiting on a Tom. His passion for the Great Outdoors has led him to a life of being a lure designer, tournament angler, and author. Brad is also pretty handy in the kitchen. He specializes in quick and easy wild game recipes that would make even the pickiest of eaters go back for seconds. These days you can still find Brad somewhere in the woods or out on the water whenever he gets the chance, or when his wife says its okay.