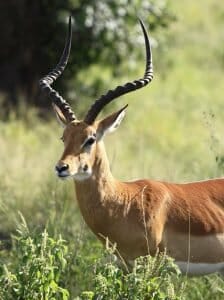 It is a show. A spectacle. Something Andrew Lloyd Webber couldn’t have mastered better. The African Safaris

A primal theater in Africa’s Serengeti where the curtain never comes down and lone acacia trees and stately giraffes are the only props.

An interactive show where yes, you are a humbled voyeur to the sex, violence, and politics of the plains—where you see firsthand survival of the fittest as the weak find their last moments of life paralyzed in the grip of a lion’s jaw.

Where the sick get left behind, or the slow and stupid get thrashed by a preying crocodile. Where instinct is alive in the wildebeest who buck, leap, and forage through their annual migration.

Where mothers protect their young, and loyalty of the pride rules the land. And the orchestra never stops playing.

From the grunts of the warthogs, clogging of the ungulates as they move like a tidal wave across the plains, roars of the lions, high-pitched bark of the zebras, the hysterics of the hyena and the foraging of the giant elephants—this firsthand experience will redefine your understanding of the word “wilderness.”

Kenya is possibly the best and most well-known safari destination to get your fill of the “big five.” We’re not talking about the Carnivore restaurant in Nairobi, where tourists flock to gastronomically indulge in the game meats of the African plains.

We’re talking, real life, up close and personal confrontation with lions, elephants, rhino, hippo, cape buffalo . . . So, choosing the best ultrasonic repellent to take it in Safari with you wouldn’t be a bad idea at all.

Kenya’s game parks are perhaps the quintessential safari experience and as a result are the best known destination for anyone seeking a safari.

As a result some would say that the plains have gotten overrun with tourists, and viewing animals can begin to feel like New York City at rush hour.

But despite this, the variety of parks—from Amboseli, where Kilimanjaro serves as the backdrop, to lesser known Aberdares in the forested north—Kenya is sure to satisfy.

The lodges and tent camps are more refined here than other safari destinations, and with the exception of Tanzania, this is the only one that can offer the chance of a lifetime—to see the annual wildebeest migration. On anyone’s safari agenda when visiting Kenya is a stay at Masai Mara National Reserve, an extension of the Serengeti.

The Mara offers the greatest quantity and diversity of wildlife in Kenya and it is the best place to witness the ungulates as they migrate to the Serengeti.

Best Season: Year-round, except April and May when the rains come.

Dry, flat, dusty land punctuated by the flat acacia tree, underneath which the mane of the male lion blows in the pre-storm wind. While Kenya is the overwhelming choice of most tourists, those in the know seem to prefer Tanzania.

It is less touristy than its neighbor, conditions are a little less refined but add to the ruggedness of the experience, and Tanzania offers such extraordinary sites like Ngorongoro crater, and Mount Kilimanjaro.

The Serengeti Plain, covering 5,610 square miles, is home to more than 3 million animals. Despite the vastness, you will be surprised at how many concentrations of prides, troops, or herds you will see.

Ngorongoro crater is a must see—probably the best single spot for game viewing in all of East Africa. It is a small Eden concentrated within one crater. Africa’s best are represented in one singular glance.

As with Kenya, the variety of safaris offered makes the trip possible for anyone on a shoestring budget and those looking for all the comforts of home but on the plains!

Best Season: September-March when it is dry and there are large concentrations of animals on the Serengeti.

You know the rules. Don’t run from a charging silverback, don’t show your pearly whites, and don’t look one in the eye if it gets pissed at you. All of this is explained before setting out on the most amazing experience that Africa has to offer.

It is within Bwindi Impenetrable forest, part of the Virunga mountain range, on the border of southwestern Uganda and the Democratic Republic of Congo, that you can come face-to-face with a troop of gorillas.

There are little more than 600 mountain gorillas left on the planet and half of them live within Bwindi. The rest remain in Rwanda and Congo but due to civil strife and rebel activity, Bwindi is seeing most of the tourist action.

After you trek through the thick brush (they don’t call it “Impenetrable” for nothing!), they see you and proceed down from their swinging vines, as if clocking in for another performance.

There is always a chance a baby gorilla will closely inspect your blond hair, or a silverback will hiss or fart — nothing is predictable in the jungle and you must obey the rules of the great and powerful silverback—you are the peeping tom into his family after all!

Whether you track the “M” group or the “H” group, you will not find a wildlife experience quite as exhilarating or emotional.